An excellent premise is more than enough to carry a game.

Two years removed from the launch of Solipskier on iPad and iPhone, Mikengreg has crafted another sport-inspired game into something that barely resembles its source material. Gasketball (Free) is basketball meets puzzler, a funky Frankenstein cobbled together with these genre’s constituent parts, each glued to the other by the will of Gasketball‘s creative vision and interesting visual oddities. It’s so good, you guys.

Gasketball‘s creativity and execution don’t always extend to its puzzle design, but you forgive its larger missteps because it gives you something new — a cohesive, quirky shot-for-shot matching game that plays it loose in the best sense possible. 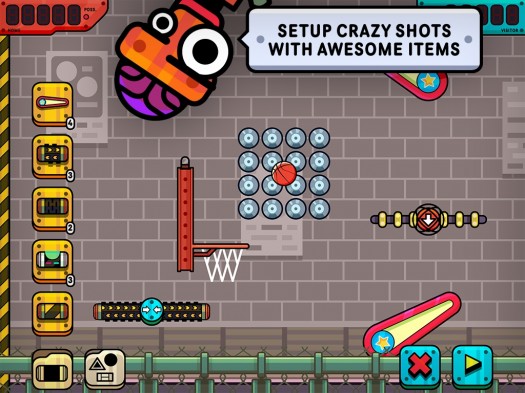 Gasketball boils down basketball to its most basic part — shoot X into Y — and then folds that into the shell of a physics-based puzzler. In practice, you get something a little like Amazing Alex meets NBA Jam.

Nuts and bolts-wise, Gasketball has you flicking a ball into a hoop, but also banking it off of environmental objects in a precise order. If the AI or an opponent’s ball hits the floor of a level and then a rail, for instance, you need to recreate that shot, bounce-for-bounce. In other words, levels play out like a game of HORSE. 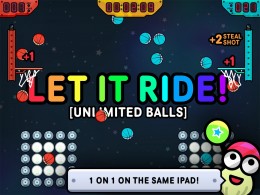 In the game’s campaign, the fewer shots it takes you to match a shot, the more points you receive. At the end of every chapter, you’ll be ranked with medals. Get enough gold and you’ll unlock other modes of play for that chapter, which prioritize different things.

There’s a welcome playground sort of feel to this premise that’s amplified by the game’s fantasy; rails are later joined by buzz saws, Portal-like teleportation devices, gravity switches, and even pinball bumpers. Each of these obstacles inject a new mechanic into the fold. Pinball bumpers, for example, flick your ball. You’d figure that these things wouldn’t jive, but the interplay of these devices is surprisingly solid.

The steady, practical integration of these new gadgets and obstacles into what becomes basically Rube Goldberg-influenced-like sequences is nice, too; the curve is gentle, the mastery of each previous mechanic assured. The theming of each chapter is striking — each one is as thematically different from the previous as it could possibly be, while still jiving with Gasketball‘s kooky, light-hearted tone.

The first set of stages take a nod from construction, each rail and object plucked from a workshop or a massive building project. You’ll see lots of caution-shade yellows and a saw blade or two. Later, there’s a space-themed chapter with deep inky blacks and bright greens and purples and there’s even a world that looks like it was built from the parts of a pinball machine. 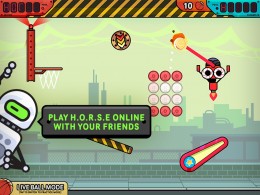 Gasketball‘s strength lies in the execution of creative vision and premise. Each level is a cheery, vibrant physics-based puzzler, each shot a solution waiting in wing. All the visual and audio elements bolster and blend into each other, eagerly drawing you into a funky world with a ton of character and style.

The cohesiveness of all its constituent parts are striking; every component of the game feeds into the other flawlessly. And the basketball-meets-puzzler premise is so unique, so lovingly bolstered by the game’s parts, that the game’s faults become easy to gloss over. But there are problems.

Some puzzles can be brute-forced, courtesy level design that has elements packed together too tightly. In some levels, you can’t do anything other but make the basket. Other levels play it a little too loose with obstacles, forcing you into exhaustive trial-and-error loops, which are a big bummer.

For most games with any sort of puzzle mechanic these are catastrophic, horrible, no-good fundamental problems. Gasketball dodges this by just being so darn sharp everywhere else. It’s easy to forgive a game that does as much as this does in such a hip package.

It’s important to note that only the game’s tutorial is available from the get-go. Each chapter, and there are four or five at the moment, is priced at 99¢. You can also get all of the game’s content, current and future, for an IAP of $2.99.

Outside of campaign, Gasketball offers competitive asynchronous online, pitting one user against another. In this, you’re allowed to construct levels in a limited sense. At the start of each turn, you spin a wheel that determines the amount of gadgets you can place around the level. An intuitive drag-and-drop interface makes putting down stuff a breeze, while a practice mode ensures that your level is do-able. The UI itself is impressive, too. It’s insanely easy to navigate.

I was impressed by this mode in its nearly final pre-release form. It seemed snappy and elegant, and conjures the campaign’s feel.  In the wild, and under the strain of users in a live environment, it’ll be interesting to see if it can hold together. Signs point to “yes" since it’s utilizing Game Center. We’ll check back in to make sure.

But anyway, while Gasketball may stumble with some of its level design, it’s a stunningly fresh game that actually shares something original. It’s a game with a vision, and all of its constituent parts come together into a cohesive, groovy whole.

For another look at Gasketball, check out: TA Plays: ‘Gasketball’ – A Whacky Take on HORSE.