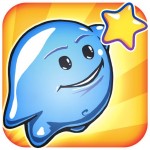 When I look at jello, I don’t think about anything acrobatic. You know the drill: chill, eat, repeat. Maybe add some fruit for emphasis. The idea of a jello hero doesn’t really sound that appealing. He’s shaking in the first place, so he’d be easy to destroy right?

Oh wait, I forgot — logic and iOS games don’t mix, especially when it comes to storylines. That being said, Jelly Jumpers (Free) is from Chillingo, who seem to be gifted when it comes to pumping out games at the speed of light. I’ve reviewed a few in my day, and while I admit some of them are a bit generic around the edges, usually I expect a good product from them. While Jelly Jumpers isn’t exactly the kind of game you want to rave to your friends about for its uniqueness, it falls right in line with the usual: fun, easy to play, and probably forgettable after you’ve spent a few hours with it. 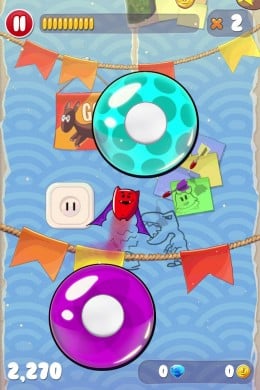 The premise of Jelly Jumpers is super simple: you’re a jelly (obviously), and your job is to ride a series of rotating spheres up the top of each vertical level. As you jump to each one, you gain a point bonus. You can also collect coins as you go, which you can use after each game to buy goodies such as different wallpaper for the levels. Some are available right away (the Holiday themes), but some of the others will have to be unlocked as you continue to play. You can also do this by collecting blue gems in the game, which show up less frequently than the coins do, but they are around.

There are other things to collect too, of course. Sometimes you’ll notice these trembling little guys on the sides of the screen, and if you jump to one, you can unlock bonuses. At first the jumping seems super simple, but it does offer some level of challenge as you move further into the game. Luckily you can stick to walls as well as the spheres, and you may need to go back and forth to get all the coins you see on the screen. A misplaced jump can send you sailing down the screen, which means game over, so even though it’s simple at first, you need to watch where you’re tapping. If you remember Oddy Smog’s Misadventure ($0.99) from a couple of years ago, the mechanics in Jelly Jumpers are extremely similar.

Jelly Jumpers gives you a daily quest, so it’ s a little more involved than your usual arcade title. It’s stuff like “gain a 50,000 point score" or “reach a 3 multiplier," so nothing too complex, but I always like the idea of a quest within an arcade title. You’ll also be able to get power-ups later down the line to enhance your character’s strength. You can earn these, or you can go to the “bank" and buy stuff with either coins earned in-game or real money.

Jelly Jumpers does have ads, but I didn’t find them anywhere near as annoying as some users did. I did notice some people were pretty disappointed that the game did not have Game Center achievements, and that does seem like an oversight considering that it seems to have all the other bells and whistles. This is a good free title, and I think some of you will have fun with it, but it does get somewhat repetitive after a while. Still, you can’t really complain about spending nothing for an hour of fun, so from that perspective I’d recommend that you give it a whirl.