We’ve seen more than our share of Chillingo-published titles but one genre that seems conspicuously missing from its repertoire is the hack n’ slash adventurer. That all changes with Orc: Vengeance ($2.99), a great dungeon crawler with striking visuals and everything you need for a Diablo-esque action-RPG.

Orc: Vengeance places you in the role of Rok, an Orc warchief charged with uniting the clans against ‘the Dark One,’ an ancient evil brought back to the realm by the arrogant humans. Rok’s mission will lead him through caverns, temples and fortresses, culminating with an epic battle against said Dark One for the future of Argon. The game’s narrative is further told via in-game cutscenes as well as a variety of lore books scattered about levels. Other than the orc-in-place-of-human role reversal, nothing in the game’s lore is particularly cliché tossing, but it deserves credit for telling the story that it does effectively and well. 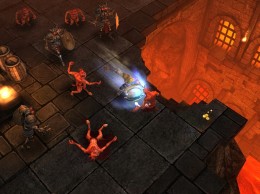 Rok has plenty of assistance in his quest against the Dark One via the game’s loot system. Each enemy and treasure chest you open has a chance to drop a wide variety of weapons and shields. Weapons are categorized by attack speed, with slower weapons causing more damage per hit, and vice versa. Shields, meanwhile, are your primary way of bolstering total defense (armor can be upgraded but is only found at set points in the game). Equipment can also be upgraded or purchased between missions via a vendor. While gold is available as an IAP, the game can easily be completed without shelling out extra cash. Some may complain about Orc’s limited inventory slots, but I think it does a great job of simplifying equipment while still giving players a wide variety of pieces to choose from.

Orc: Vengeance takes its gameplay cues from old-school hack n’ slash games. An experience/leveling system gives you some character customization via the game’s attribute system, allowing you to improve your hero’s attack, defense, greed (affects coins earned via loot and sales) and vengeance (think magic points for your skills). Skills are found on the battlefield in special chests and can definitely be missed if you don’t explore the few path deviations. You’ll be using those skills against hordes of enemies from the lowly spider to the giant troll, with a lot of areas that have you fighting multiple enemies at the same time. 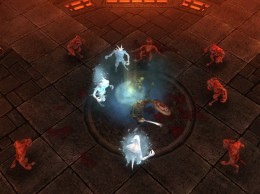 One area that I feel Orc absolutely nails is its pacing. Missions are divided into pocket-appropriate chunks that do a great job of pushing the action and narrative while still giving you plenty of discernible areas to take it a break. A checkpoint system fine-tunes the experience even further leaving players with little frustration should they have to restart an area due to a death. One minor annoyance with the system is the lack of any way to skip cutscenes (bosses and big battles typically have some cinematic associated with them), however I never felt it was too significant. Full iCloud support with cross-device game saves is an excellent feature and one that needs to become more prevalent in the genre.

It’s important to mention just how beautiful Orc: Vengeance looks. Retina visuals for both the iPhone and iPad are supported, and the game looks amazing on both. I’m particularly impressed with the game’s backdrops, as you’ll see a lot of depth in some areas. There were some strange graphical glitches, particularly with the game’s standing water areas, however for the most part Orc looks excellent.

Control-wise, Orc: Vengeance uses a tapping control scheme that players will either love or hate. To move, players simply tap on the place they want Rok to go. Similarly, a tap on an enemy engages auto-attack. A tap and hold on initiates a run in the direction of the tap. Skills can be assigned to one of four pre-set swipe motions, which include double-tap, straight swipe, circle, and a ‘z-swipe.’ The first two are easy to pull off, but occasionally I had some issues with getting the game to recognize the latter two.

Where Orc’s controls falter a bit are in situations with a ton of enemies or tough bosses. In order to succeed in such battles, it’s imperative for Rok to stick-and-move in order to minimize damage and recover armor. Similarly, bosses typically have area of effect attacks which need to be dodged in order to survive. Thus, you’ll find yourself having to tap and hold in order to run, which can occasionally lead to an errant tap on another enemy or even on the boss you’re trying to run away from! An auto-run option would have been nice as well. Otherwise, I thought the controls worked as well as they could, especially considering their necessity in order to preserve the ability swipes.

As evidenced above, Orc: Vengeance is not without its issues. However, these minor annoyances are simply that. Even with these, you’re still left with a great hack n’ slash action-RPG with plenty of loot, decent controls and beautiful visuals.  Folks looking for the next great dungeon jaunt need not look any further, as Orc: Vengeance comes highly recommended.

For another look at Orc: Vengeance, check out: TA Plays: ‘Orc Vengeance’ – A Gorgeous Hack-and-Slash RPG