Most basketball video games are about the thrill you get from hard-court wizardry — the feel of sliding between players or setting up the perfect pick, or drilling a shot as a clock winds down or jamming a ball into a shooter’s face as he glides to the net. Other basketball games don’t do any of this. Like Gasketball, for example.

Gasketball is the second iOS release from Mikengreg, the two-man studio behind an arcade skiing game called Solipskier. Like that game, Gasketball is tonally quirky and it plays it loose with its sport. In fact, it’s more of a physics-based puzzle game than it is a basketball game, much like Solipskier was more of a runner than a serious slope skiing game. 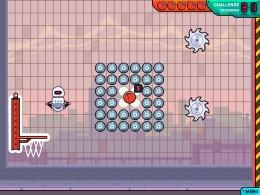 Basketball simplest concept is this game’s premise: get X into O. The core mechanic revolves around picking up a ball and flinging it into a hoop through Rube Goldberg-ian constructs and setups. In order to score, you’ll need to shoot your ball through these obstacle courses specifically. If an opponent banks its ball off a rail on the way to the hoop, you’ll need to hit that rail with your ball, too. If an opponent put his ball through a teleporter, banks it off a rail, and then hits a gravity switch before it slips into the hoop, you’ll need to do the same.

You match shots, in other words, like in HORSE, a playground favorite. The more perfectly you can reproduce a shot, the more points you’ll score. There’s also a grading scale based on the number of attempts you have to take.

In motion, Gasketball plays like a series of sandboxes. You can fling your ball as hard or as softly or with as much of an angle as you want, but  it’s the HORSE rule set that makes it sing. In essence, each round is like a puzzle, every solution an injection of “a-ha!" just waiting to flood your grey matter.

Being more than just a basketball game has been an issue for Mikengreg. Gasketball is a mix of a lot of genres, including puzzle, so it’s hard to sum up in a nice, neat little package.

“It is a pretty different mix and that’s one of the things that really excites us about the game," designer Greg Wohlwend tells TouchArcade. “The core mechanic involves a lot of ‘touch’ which means it’s kinda right at home on iOS, just like Solipskier." 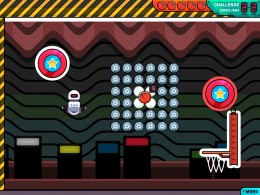 “It’s pretty different," he says again. “It can never truly be mastered, just like real basketball when a player gets hot from the three-point line one night, and goes ice cold the next. I think that’s awesome."

Pitching the game to gamers has been so much of a problem that Mikengreg have decided to make it a free-to-play game with optional IAP level and content unlocks. The hope is that even though word of mouth will just be nebulously positive, gamers will go ahead and give the game a look because, whatever, it’s free.

“We hope that people play it and go ‘whoa, this is awesome! there’s so much here!’ and they tell their friends ‘hey! did you try Gasketball!?’ ‘no, why is it good?" ‘yea, it’s awesome, just get it dude, you can try it for free!’," Greg says.

Gasketball is divided into two distinct wholes: campaign and multiplayer. The campaign is further divided into several themed chapters, each of which have several levels that dish out challenges based on that theme. The first chapter, which will be available with the game when it hits, introduces saw blades and rails. Later levels ratchet up the goofiness, as they begin incorporating teleportation devices, pinball machine bumpers, conveyer belts, and switches that fiddle with gravity or speed. Some of these missions will come with a price. 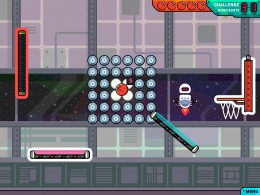 Each campaign level straddles the line between challenging and too easy — shots require precision and a grip on the game’s interactive systems, but levels are designed in a way that ensures you’re always close to making your shot. Designer Michael Boxleiter breaks it down for us:

“Greg is the single player expert, since he did most of the level design work, but it’s very surprising how easy it is to make a shot almost play itself," Mike says. “We noticed this early on when we had the first prototype for the HORSE challenge working, it was just single iPad pass-and-play, and we would be trying to make a very difficult shot over and over and failing 20-30 times in a row."

“Then, we would go back into edit mode, turn one barrier just slightly, go back into shooting mode and make it in one try," he tells us.

Mike says that Greg and he play every level several times, making tiny tweaks along the way to make sure the ball is always guided towards the hoop. “One of the most important keys is that when we’re designing levels, we’re doing it on the iPad with the same rules as HORSE. If we can’t make a basket, we can’t save the level," Mike says.

If you’d like to create your own levels, you’ll be able to do so in the game’s Practice mode, which lets you do whatever to hilarious results.

You’ll also be able to set up obstacle courses in a much more limited sense in the game’s asynchronous online component. Like HORSE, users take turns matching each other’s shot. Unlike HORSE, at the beginning of each round, players spin a Wheel of Fortune kind of wheel that determines how many and which kind of objects they’ll be able to place. At this point, a mini-“practice" mode is engaged where you can fine tune your placement of rails and teleporters and such. Once you nail what you want, you seamlessly switch to a live mode, make the shot, and wait for your opponent to take his turn.

It’s insane how zippy this is, by the way. The wheel keeps the amount of stuff you can use to a low, which keeps the barrier of entry down while also mitigating the amount of idiocy you’d probably see otherwise.

One last thing to note about Gasketball: tonally and thematically, it’s a striking game. It’s sort of has a cheery funkadelic appeal. Its colors are bright and wonderful, while its music reminds you of early hip hop. We asked where this came from, since it’s a little out of left field. 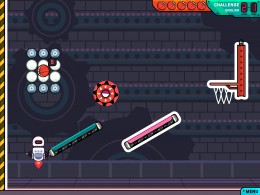 “The theme has really been in the works from the beginning. We had an early flash prototype without any of the shot-matching HORSE stuff, but the seeds of the theme were still there in that we wanted to make it sort of mechanical. That sort of evolved into a construction site wackiness — the backboard as an i-beam, walls as caution barriers, etc," Greg tells us.

“With every new game we make we try to do something new that we haven’t done before. I’m known for my simplistic graphics and clean edges, but what this game needed was personality and warmth."

“But really, I love basketball. It was my best sport growing up, besides golf. I’d practice out on my driveway for hours every day and naturally, I loved games like NBA Jam and while seemingly unrelated: Cool Boarders and Toe Jam & Earl 2: Panic on Funkatron. I was obsessed with these games and the way they talked to you. It was so goofy that it was cool, it still is, especially with TJ&E2."

“I hope we managed a fraction of that style in Gasketball with the robots and so on, and we might try to inject even more of that down the road if we can swing it."

You’re not supposed to say this in a preview, but … we’ve little doubt that this game is going to blow some minds and be in the running for our GOTY awards in December. It’s smart, it’s fresh, and it’s a totally new experience.

We’ve got video the game in action in this article if you’d like moving pictures as opposed to word pictures, so check that out if you’re interested.

Gasketball is due out soon. We’ll keep you posted on the exact date.