We’ve all likely played our fair share of endless runners by now, or endless diver I guess in this case, but have you played one where you play as a penguin strapped to a rocket? Chances are you haven’t, and Captain Antarctica ($0.99) is that game you haven’t yet played, and you probably should.

The penguin collective are out to save some of their own from an evil eagle mastermind, and you play the role of a rookie by collecting fish to power your own rocket to take out this eagle boss. What this translates to while playing is soaring towards the bottom of the screen, touching as many fish as you can, making your rocket more powerful as you go.

To control yourself, you’ll need to tilt your iOS device left and right to make sure you’re always heading towards your next fish, and not any of the plentiful obstacles always in the way. I’ve never personally been a fan of tilt controls, as they’ve always felt incredibly inaccurate (with the one exception being Temple Run (Free)). Captain Antarctica changed my viewpoint by showing me that tilt controls are often just poor design, as I never had any trouble navigating the narrow pathways in this game. 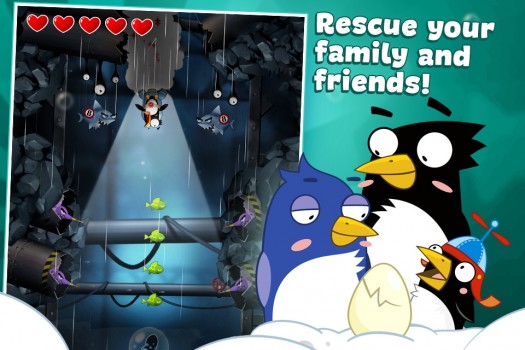 It seems that many endless runners and other games like this have introduced the mission system we first saw in Jetpack Joyride (Free), where you’re able to complete various side goals for extra rewards while playing. Captain Antarctica refers to them as “Experiments" and it’s mostly basic tasks such as collecting coins, hitting enemies and avoiding obstacles. These mini goals always manage to hold my attention, so it’s nice to see them in a game that I could play for hours nevertheless.

Another feature that isn’t new, yet welcomed is an in-game store wherein you can use collected coins to buy extra lives, speed boosts, better rockets and more. Sure, you can also buy coins if you want but the game gives you plenty of coins for playing, and is generous enough to where opening up your wallet doesn’t seem necessary, at least for a while.

For a game of this type, you don’t often see different levels for you to explore, meaning the environment, enemies and bosses will all be different depending on which. Sure, the game still plays the same regardless of level, but having the game broken up like this makes it easier to swallow in the long run. As of now, there are six levels for you to master, with at least one more on the way.

Speaking of the environment, you can tell FDG spent a lot of time making sure Captain Antarctica looked good, in having cartoony graphics that fit with the nautical theme presented. The cartoon style is enhanced by the cutesy sound, with catchy tunes you can tap your feet to.

With there seeming to be no end to the endless runner genre on iOS, it’s nice to see a high quality one released every once in a while. Captain Antarctica is in no way perfect, but it’s fun while it lasts, and has plenty of features to keep you hooked for a while.