What do you get when you mix a timepiece with tetanus?

Clockjaw. Get it? Clock… ah, never mind, it’s not much of a joke, is it? Just clever wordplay, that thing that Frankenword (Free) is so good at. Take two things that share a few letters, mash them together, then run with the bizarre, overlapping chimera you end up with.

It’s something of a one trick pony, but I find it strangely satisfying. It’s the Pringles of word games: you know there’s not much too it, it’s not especially good for you, but once you pop you just can’t stop. Generously, I could call it a good test of vocabulary, but it’s a far better way to stretch your imagination. Picture the cougarcade from the game’s description, or maybe some dwarfare. Snickers aside, it’s good to engage your powers of pretend.

Not only do most of these odd mouthfuls conjure up ridiculous images, but Frankenword’s developers have kindly given our imaginations a boost with the occasional definition. For example, that cougarcade? It’s a noun, meaning “where mountain cats play video games." More of these, please, Xether Labs. I don’t want to tweet that a word is “hilarious," I want to share the whole joke. 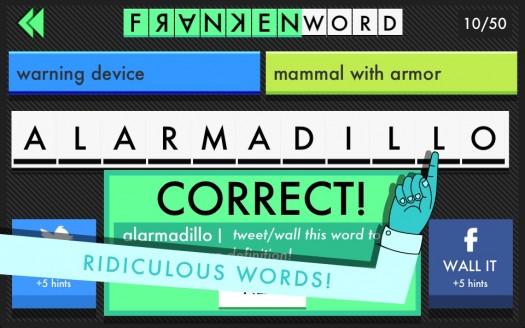 Frankenword gives you 50 words for the low, low price of free. Are you a master of mash-ups? You’ll know once you work your way through the free content. After that, there are three more packs for purchase, each with 150 more puzzles. That ought to be enough to satisfy just about any appetite.

It couldn’t play much more simply. Each word is set up with two hints, a row of blank spaces, and a collection of letter tiles. Tap the first hint to see the length of that word, then come up with an answer that uses the letter tiles you’re given. Then tap hint number two, and remember to account for the spaces where the words overlap. Total cake.

Maybe a little too cake, if you know what I mean. Having all the letters laid out in front of you (give or take a few spares) makes many of the puzzles the literary equivalent of pablum. This does offset the game’s other big weakness—its rare but irritating insistence on making up new definitions for words. There’s also a pile of handy hints available when things get a little too complex or confused.

Look, here’s what I’m saying: Frankenword isn’t hard. It’s just not. If you have a functioning English vocabulary, you’re usually going to burn through a dozen words in half as many minutes. I am, surprisingly, totally cool with that. To flog that potato chip analogy again, this is one of the few word games I’ve played that really works as a light snack. I’m always down for a round of Spelltower ($2.99), but that game takes time and concentration. Give me two or three minutes waiting for the train and they’ll be a lot more productive with Frankenword.

It’s not the cleverest, perhaps, and that’s a strike against it for any aspiring linguists in the crowd. On the other hand, it’s sharp, attractive and fun. That makes it an easy recommendation, especially at this price. If you’re a casual word game fan, Frankenword is the casual word game for you. Check it out; I’m sure you’ll be crossbreeding concepts in no time at all.