If there’s one thing we can rely on these days in iOS gaming, it’s the never-ending stream of cute puzzle titles from Chillingo. Jar on a Bar (Free) is the latest such game, and like many before it it’s a competent mix of cartoony visuals and physics based touch gameplay. While its overall presentation and implementation make it a game that’ll probably appeal to puzzle fans alike, a reliance on IAP along with dodgy physics are sure to stifle any broader appeal it may have.

Jar on a Bar follows the tale of a goldfish that gets trapped in a jar and is left perilously on top of a wide variety of structures made of wood, ice, and other materials. Your goal is to guide the fishbowl down to the bottom of the screen, where your fish friend happily jumps out of the bowl and back into the adjacent stream. If the bowl tips on the way down, you lose water and points, which determine the rating received at the end of the stage (with a max of 3-stars of course). 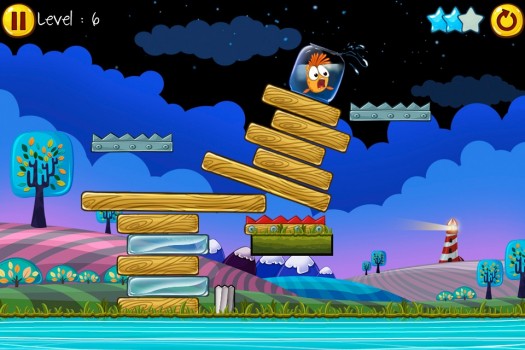 You’ll be guiding the fishbowl down the level by moving around the pieces of materials placed below the bowl. You can slowly move pieces about to balance everything on top of it, or you can try to pull the pieces out quickly to try and minimize the movement above. Meanwhile, the physics of each piece are always in play as moving certain pieces can create ramps, barriers, and other makeshift obstacles preventing the bowl from getting where you need to go. Meanwhile, pieces made from things like ice add to the strategy as they’re not as simple as wood and have their own unique properties. The game shares a lot of its fundamentals with the likes of Jenga, which is a fun twist on the puzzle genre.

Of course, having a predictable physics system is imperative for a physics-based puzzler, and unfortunately that’s where Jar on a Bar falters. I had several instances where block pieces would move in erratic ways after swiping them. There were also occasions where pieces would look flush with each other but really weren’t, making planning complicated moves hit-or-miss. Obviously, some amount of unpredictability is inherent in physics games, but I just found the game to be a little too unpredictable, which takes a lot of the enjoyment away.

In addition to earning stars, completing levels earns you seashells that can be used to purchase one-use power-ups (such as wings to aid in level completion). While you don’t earn much in day-to-day play, there’re plenty of options to purchase shells via IAP. I’m not a big fan of the power-ups as the high general difficulty seems to be a lure to purchase them simply to get a high score (which in turn is an implication towards IAP). The incessant nagging to purchase power-ups after level restarts (which thankfully can be turned off) doesn’t help, either.

In the end, Jar on a Bar is a classic case of a puzzler with decent ideas hampered by some implementation choices. In this case, the physics, ensuing difficulty, and IAP are its biggest detractors. While the game is certainly playable and will probably offer some entertainment to puzzle fans, there’s a lack of noteworthy design or appeal to expand beyond that.