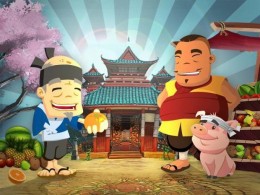 We just got word that Ape Entertainment, creators of the Pocket God comic and recently announced Temple Run comic apparently won’t rest until they’ve turned every popular iOS title into a comic book series. As of this morning, they’re adding Fruit Ninja to their library of iOS-themed comics. Just like Temple Run and Pocket God, the Fruit Ninja comic will “explore the yet untold backstory of the juicy Fruit Ninja universe and its new colorful characters" Similarly, it’ll be available in a digital version as well as an eventual physical printed copy in the next few months.

This begs the question of what series is Ape Entertainment going to tackle next? Doodle Jump? Canabalt? Space Miner? …Actually, wait, all three of those could be pretty awesome now that I think about it.