It’s no secret that we’ve been, on occasion, distracted by a certain action-RPG of late. Heroes Call (Free), the latest from Defiant Development (which brought you Ski Safari ($0.99)) looks to capture some of the magic with an iOS dungeon crawler infused with its own brand of freemium elements. While I didn’t particularly have a problem with its freemium mechanics, Heroes Call does falter somewhat in other areas.

From a glance, Heroes Call plays very much like a standard hack n’ slash action RPG. Players move through the game via levels with simple objectives such as standard collection quest or by simply getting from one point of the map to the other. Along the way, enemies drop gold and a large variety of weapons and armor. After finishing a mission, characters earn experience, and a simple trait system lets you choose new abilities after each level up. Everything is rather typical and it wouldn’t be a stretch to simply classify Heroes Call as a simplistic Diablo clone.

Speaking of Diablo, one area that Heroes Call seems to mimic well is its loot system. Loot is randomly generated and running through a mission usually ends with a decent haul of a variety of items, magical or otherwise. I also appreciated the fact that equipment plays an important role and you’ll find yourself constantly needing to upgrade to handle the increase in enemy difficulty. It all leads to a complete, if standard, experience. At least, until you get to the freemium elements. 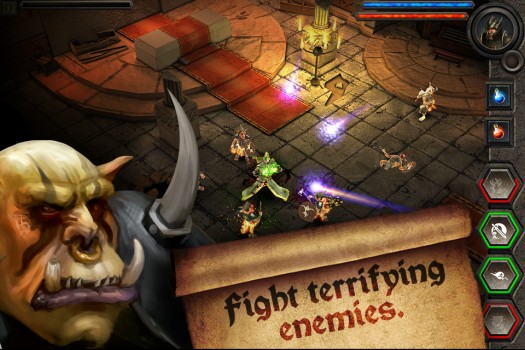 Heroes Call incorporates a freemium system that focuses less on paywalls and more on simply waiting. After completing a mission, a timer starts until you can begin the next mission in the story. Later missions begin to take longer and longer until you’re seeing hour plus wait times. As you can imagine, players can easily bypass the wait by spending gems (the premium currency that you can also purchase via IAP).

Another facet of the ‘wait-wall’ is in its identification of magic items. Players can either use an identification scroll (which can be found or bought) to instantly ID an item, or they can take it to an appraiser between missions which IDs an item for free but takes time. As expected, the stronger and more rare the weapon, the longer it’ll take to ID.

While the freemium elements seem to indicate you’ll be waiting a long time between play sessions, I found the system in Heroes Call to be surprisingly fair. The timers never felt overtly long and let me separate my gameplay into chunks. In addition, you are always allowed to play previous missions to collect more gold; the timer only applies to new missions. I was also impressed by the fact that while some of the items found in the in-game shops required gems, the vast majority were gold based. Meanwhile, I found it relatively easy to collect the gems themselves throughout my questing, giving a nice collection to spend on whatever I wanted.

Unfortunately, a surprisingly fair freemium system can’t help the relatively dull gameplay. I’m not sure if it’s because of the touch controls or the limited amount of abilities per character, but actually playing Heroes Call feels like a sluggish affair. Attacks and character movements are slow, there’s very little interaction with the environments (other than the multitude of barrels to destroy and the occasional treasure chest) and the heroes and NPCs just feel devoid of personality. This extends to the story, which is told via cutscenes before each mission and really didn’t do much for me. That’s not to say that the battle system is bad – it’s just not a standout experience.

Regardless, considering the freemium nature of Heroes Call, fans of loot-based dungeon crawlers should at least give it a try. There’s enough content to keep players engaged, and the loot system works well in keeping you coming back to try and find a better piece of equipment. The fact that progress is easily moved between iOS devices also enhances the pick-up-and-play mentality (assuming the times aren’t active). While I wasn’t a fan of the actual hack n’ slash bit, fans of loot chasing can probably look past the imperfections and focus on the treasure collecting.