Itadaki Street has been around for over twenty years on various gaming systems but Fortune Street Smart (Free) is the first in the series to appear on iOS. While this title does a great job preserving the classic board game mechanics of the series, various other issues, along with an iffy DLC plan, keep it from being a sure hit.

If you’ve never played a Fortune Street title before, bear with me for an explanation. Fortune plays like a strange melding of Monopoly with a stock market mechanic. Players roll a die to move across a board littered with shops that can be purchased. After you buy a property, any players that land on it owe you money. Also present on the board are four tiles that represent the poker suites. If you manage to pass through all four suites and then get to the starting bank location, you’ll receive a salary payout, which serves as your initial primary method of collecting money. 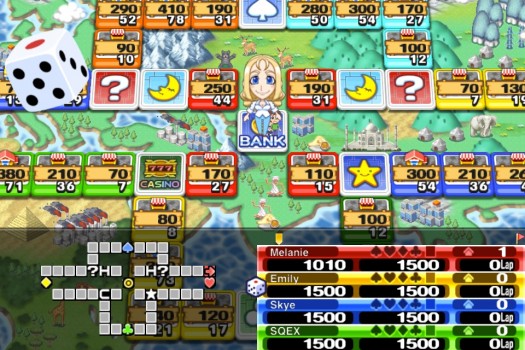 Maps can also include a variety of other tiles, such as a casino that lets you play simple games for money or items and fortune squares that offer you the chance to pick a random effect which can be good or bad. The end goal of each game is to amass a certain amount of total assets (which can be customized) and then cross the bank while over that threshold.

Adding a significant layer of strategy to Fortune is the stock market, which can have such an impact on games that it’s even an option you can turn off if you wish (hint: select ‘Easy’ mode). Every time you pass the bank you’re allowed to buy stock in the various ‘neighborhoods’ of properties that are all over the board. Buying stock gives you the opportunity to collect dividends on the properties (regardless of who lands on them) and allows you to further invest in individual properties (which raise stock prices and the amount other places have to pay you if they land on your shops). 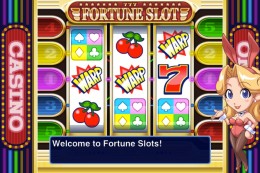 As you can imagine, Fortune Street Smart has the potential to be a very lengthy and complicated game. Individual matches can easily last an hour, and there are a lot of facets to take into consideration for every move you make. Of course, it’s important to note that even though there’s a lot of planning that can occur, a good deal of Fortune is still reliant on the dice roll, which can easily turn a game into a frustrating ordeal depending on how the initial rolls go. Folks looking for a ‘true’ strategy game need to understand that this is primarily a game of chance first, with a deep strategic layer on top of that. Multiplayer is also available, but limited to local pass-and-play.

While the game itself is fundamentally sound, there are a few design decisions that I thought were questionable. For one, there’s way too much attention given to your computerized character opponents. They will constantly provide silly comments before and after turns which do nothing more than make the game longer than it needs to be. When you’re in the middle of an hour long battle, the extra moments of having to tap through conversation bubbles become unnecessary. The lack of universal support (or even an HD app at least) is also perplexing, considering how well board games work on the iPad.

Visually, Fortune Street Smart is simply bland. The chibi-style character design and board backdrops don’t really do much for the game. The same goes for the music, which feels cheesy and doesn’t add to the experience. Thankfully, being a board game, these aren’t important elements, but it’s still disappointing. 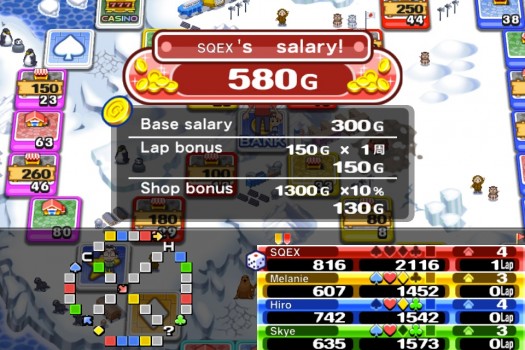 I’m also not a big fan of the way Fortune Street Smart seems to nickel-and-dime players. The initial app is free and includes one map for unlimited plays with the opportunity to unlock the “full game” via IAP which adds an in-game currency shop for replayability and a few modes, maps and characters. However, once you purchase the full game, you’ll immediately see that there are five additional DLC packs in addition to the ‘full game’ purchase. Folks looking to purchase all the maps and characters are going to be looking at a sizeable investment with IAP. As an aside, if you were expecting the themed characters and maps from other versions, neither the full version nor the DLC carries it (due to licensing issues, I imagine).

Of course, the DLC seems limited to additional maps and characters, which make it mostly optional in my book. Meanwhile, Fortune Street Smart is a classic example of a title with great mechanics hampered by some of the other supporting elements. Seeing how the initial download is free, I’d recommend at least checking out Fortune Street Smart and seeing if the hybrid gameplay is a good fit for you.  After that, you can decide if the unlock price and plethora of DLC are worth your cash.