There are great mysteries buried beneath the surface of the alien world of Gene Effect ($3.99), mysteries your small team has been sent to uncover. As you immerse yourself in the atmosphere of those distant tunnels, you’ll encounter alien life, hostile and beautiful, and the remnants of a civilization both ancient and powerful.

You pilot the exploration ship Triton. It’s almost ludicrously vulnerable, destroyed with equal ease by careless piloting, aggressive plant life and man-made defenses. But that doesn’t change the facts: you’re the only one who can unlock the secrets of this cavern and its alien masters. Unarmed but for your repulsors, you travel ever deeper.

This journey isn’t one of lengthy maze-like exploration. Gene Effect is broken up into levels, and most of those levels are fairly straightforward. There will be a task or for the Triton to complete, maybe collecting a certain amount of koronite resources from the environment, finding DNA samples or powering up ancient reactors. You might need to use your repulsors to clear away loose rocks in your path, or locate and use the occasional drone to clear a path. Once those things are done, it’s just a matter of finding the warp gate and moving on. 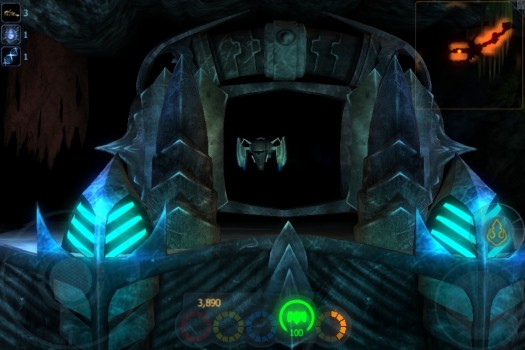 There are subtasks that might impede your progress, though. The path is often blocked with gates that need opening in some way—finding the right triggers tucked away in the tunnels, collecting enough of a resource or turning on (or off) the lights. On their own these things are usually fairly simple—or at least they would be if not for the presence of so many walls.

Walls are the Triton’s natural enemy. While you’re still getting comfortable piloting you might find yourself bumping into them. Do so for more than a moment and you’ll blow your ship up. The controls are well-designed, with a responsive joystick that controls movement, so crashing shouldn’t be a big problem for long. It’s when you’re comfortable that the game brings in mines and plant life that will smash you into walls if you’re not ever-so-careful. 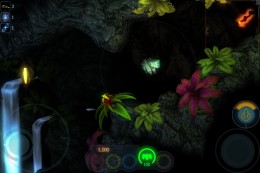 Once you have survival sorted out, you can start to enjoy the real meat of Gene Effect. It’s a completionist’s dream, with level trophies for speed, careful navigation, and overall score. And then there are the relicts and artifacts. Nearly every level has a hidden relict or two tucked away somewhere. They’re often hidden in the walls, revealed with a lucky ping of your sonar and a well-placed blast from Triton’s repulsor. Sometimes they’re hidden more deeply, in temples opened with camouflaged triggers or rooms tucked away behind seemingly solid walls. Some, the most hidden of all, aren’t even listed on the level score breakdown, so you won’t know they’re present until you find them. Those are the alien artifacts, and if you find enough pieces you’ll be able to strap them on to Triton to upgrade its capabilities.

While all of this is going on, the game slowly unfolds an intriguing story. It tends toward telling over showing, as it’s revealed far more in static text feeds at the end of each level than within the gameplay itself. There are also a few too many errors in the text for comfort. But the story has some great hooks, and it should string you along quite effectively while you’re out exploring.

Gene Effect is ambitious, and long—accounting for deaths, I’ve put in quite a few hours without finding everything that’s out there to discover. But that length also highlights the game’s flaws. For example, the caves, while gorgeous, all look fairly similar to one another, and while the levels grow more difficult they don’t really get all that complex. On its own this would start to feel a bit repetitious, and pixel-hunting your way to new artifacts doesn’t really help.

The game’s difficulty level varies between hard and stupidly frustrating. Some of the later levels are long, and meander between traveling through long, mostly harmless tunnels and facing down sudden bursts of danger. Long periods of boredom followed by short-lived struggles aren’t really what I look for in entertainment. Take it easy when you choose your difficulty—Gene Effect is harder than it looks, and you can’t really change difficulty modes mid-stream.

All of this leaves Gene Effect something of a tough call. On one hand it’s gorgeous, with a well-crafted story and loads of content. On the other hand, that content ventures into boredom or frustration a little too often. Ultimately, though, it’s a game worth playing, a story worth experiencing. And it will leave you wanting more, so let’s hope there’s more on the way soon.