It seems as if ever since the iOS remake of Death Rally (Free) hit the scene over a year ago, we’ve had a resurgence of weapons-based racing titles gracing the platform. Deadmans Run ($0.99) from Nightfall Interactive is another entry into the genre and attempts to model itself somewhat closely to Death Rally. While Deadmans Run does try to differentiate itself from the pack in some ways, you’re mostly left with a fairly average racer with controls that leave a bit to be desired.

Deadmans Run offers a somewhat comprehensive campaign that has you racing across nine different levels across three “difficulty” levels, earning both cash and notoriety (essentially experience points). The cash is used to purchase permanent (engine, weapons, and armor) and temporary upgrades for your vehicles while the notoriety acts as a level-wall that restricts upgrades and car purchases until you’ve hit a certain level. Overall, the system works well enough for replayability, although the strict level requirements for each purchase take away any sense of freedom, which is a bit disappointing. 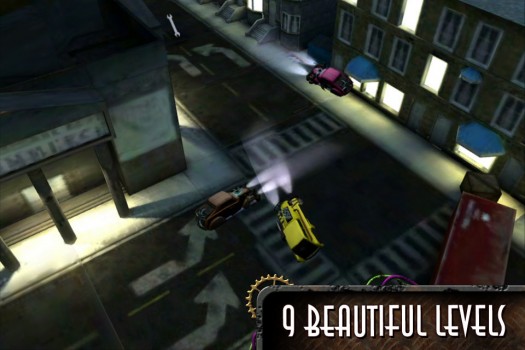 Gameplay involves your standard race-to-the-finish with positional awards, although the inclusion of weapons makes it a bit more interesting. Cars all come equipped with machine guns and mines, with ammo refills (among other power-ups) randomly littered on the track. As you upgrade your cars, you’ll typically find yourself in races that end prematurely because everyone else (or you) has been destroyed. This typically leads to a very hectic racing experience, especially at the onset of the campaign since you’ll be losing a lot before you can earn enough cash and notoriety to build up a contending car.

One area that I thought Deadmans Run did well dealt with its dynamic generation of races. As mentioned above, there are three different difficulties in the campaign. Whenever you want to race, each difficulty will randomly choose the level and opponents (while usually keeping the purse winnings the same). 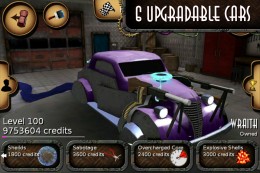 In addition, races will occasionally offer supplemental objectives, such as to take out a specific opponent before the race is over. The supplemental quests actually offer penalties if you fail, making the choice to accept it have actual repercussions. Unfortunately, while the dynamic missions are an interesting idea, you’ll quickly find that the two harder difficulties will be way too challenging to play for quite a while. One item of note is the complete lack of IAP, so all notoriety and cash will have to earned by (gasp!) playing the game. In addition to the campaign, a time trial mode also exists.

While everything above seems fairly decent, Deadmans’ controls are where the experience starts faltering. You are given the option of two control schemes: auto-acceleration and manual gas. Auto-acceleration is the default and my preferred control type as it allows you to focus mostly on turning and aiming. Unfortunately, this also leads to a lot of lost control when you’re making tight turns as you’ve effectively lost the ability to ‘ease up on the gas.’

Manual gas, meanwhile, just feels awful as the gas ‘button’ is right smack in the middle of the two turn portions, which feels extremely unintuitive for me.  Either way, additional miscues such as a very bouncy physics system and the occasional unresponsiveness of controls don’t help the experience, either. Other facets of Deadmans Run, such as the visuals, felt mostly average and don’t add or detract from the rest of the game.

If you can get past the spotty controls, Deadmans Run is an adequate racer with enough meat in its campaign to offer genre fans something to try. There are gamers out there that are simply looking for the next ‘rat race’ to race through, and this game can certainly provide that. However, the overall rough presentation and spotty controls are enough to detract all but the diehard combat racing enthusiasts.