One glance at Jumping Knights ($0.99) ought to pretty much explain the premise – it’s Doodle Jump with a tokidoki-inspired art style. I was expecting to pick it up, go a few rounds, and be able to name it as a clone and get on with my day. Except hours went by, and I was still playing, and thinking with tinges of guilt about the To Do list that I was ignoring. A little more time spent, and I had forgotten completely what a To Do list even was. Responsibilities? Don’t be silly, I just got sight of the princess, which means I’m getting closer. Who cares about grocery shopping?

Jumping Knights might share a lot of format similarities with Doodle Jump, but one can’t help feel it’s embroidered on the concept. In fact, Jumping Knights is actually one of those genre hybrids that I always tend to be so crazy about, a la Puzzle Quest. It takes a cute, cartoonlike world and puts you in the role of a determined little knight,  jumping from platform to platform with a trusty sword in hand. Just like Doodle Jump, control is managed by simply tilting the phone left and right. 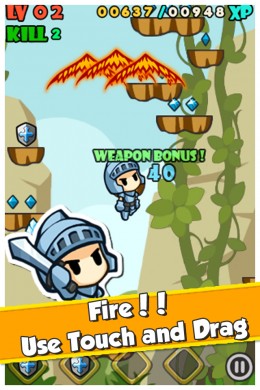 As you go, the aim is to avoid falling, collect power-ups along the way that make your ascent easier, and to beat the bosses you meet at the top of each level in order to save a princess. It’s an action game, but it also has a taste of RPG spliced in since your character can gain levels. It also racks up items as you collect them, so you have a little inventory to use at will. There is no shortage of items either, so it’s a waste to try to hoard them in wait for the boss at the end. You’ll have more than enough to go around.

One area that Jumping Knights improves upon Doodle Jump is variety. Every time I played, I saw different power-ups, and I quickly learned that some were more rare than others. I looked forward to getting items like the kiss, which turns your eyes into hearts and sends you hurtling upwards into a momentary love frenzy. Or the dragon egg, which sets you upon a winged companion that soars towards the goal much more quickly than you can leap. Accompanied by basics such as shield power and weapons power-ups, it keeps you always aware of what’s coming next and what powers you always want to have at your disposal.

There are creepy crawlies in the world too, but they can be avoided fairly easily if you aren’t in a sword swinging mood. Bosses are a bit harder, but I wouldn’t call them difficult. “Suitably challenging" is probably a better descriptor, which means if you don’t defeat them, you don’t feel too frustrated to try again right away (which I consider to be a very good thing). The game is connected to Game Center as well, so you can go there and check out how many other players are whipping your ass.

Bouncy music, crisp and colorful graphics and a basic but effective formula make Jumping Knights the kind of thing that I immediately considered to be one of those games that I will never delete from my phone. When an entire game lasts 25 seconds, it’s all too easy to say “just one more round" and keep going. I did that about thirty times, until I realized that it had gotten dark outside and I had been trying to beat my high score for way too long. Not a deep experience, but when you need something to play for your commute or while you waste ten minutes waiting for your take out order, Jumping Knights is sure to please.