In our previous review, we covered N.O.V.A 3’s ($6.99) single player experience with the promise of reporting on its multiplayer after the game hit the public and the online servers filled up with players. Unfortunately, after a few days of blasting away against fellow iOS gamers, N.O.V.A.’s multiplayer hasn’t quite lived up to expectations.

From a generalized standpoint, N.O.V.A. 3 appears to have everything needed for a successful multiplayer experience. There’s 12-player support across six different game types, ranging from staples like free-for-all and Team Deathmatch, to objective-based modes like Capture the Flag, to even some novel gametypes such as Freeze Tag. There’s also a wealth of customization options including a full selection of weapons, weapon upgrades, power-ups, reward streaks, and even trash-talking statements. A decent amount of custom slots also means that you can plan out a variety of different load outs once you unlock the various weapons and options. 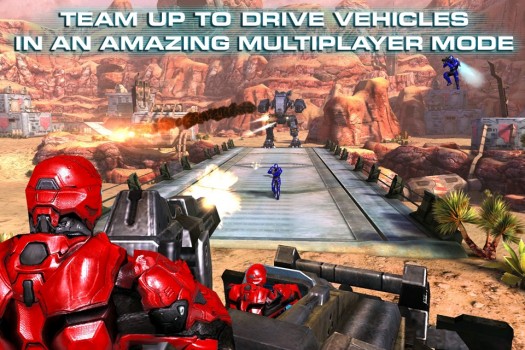 You’ll quickly find that most of the weapons and power-ups are locked at the onset and require you to earn cash through multiplayer matches to obtain them. A leveling system serves as an additional tier, with most options only being available for purchase after reaching a certain level. This is important because while N.O.V.A. 3 gives you the opportunity of simply purchasing the multiplayer currency via IAP, you can’t necessarily buy the best guns immediately without doing your time in-game. Overall, there’s a lot of things to keep you busy while playing , but the actual multiplayer experience is where thing start to falter.

When firing up a multiplayer game, the last thing you want to deal with is lag. Unfortunately, N.O.V.A. 3’s multiplayer seems to be inundated with that exact  problem. The laggy matches lead to issues with hit detection, movement, and in severe cases straight up match disconnection. The match disconnections in particular would start a 30 second countdown in the hopes of restoring a connection, but they never did (such a tease). Probably the most frustrating thing with N.O.V.A’s lag is its random nature – some games will run perfectly while others can feel downright unplayable. Regardless, other issues like a poor respawn system didn’t help either.

I also wasn’t a fan of the way the breaks between matches were taken care of. After each match is concluded, players are dumped back into a map/mode selection screen where the host is given the opportunity to change up the settings. For me, this lead to a lot of situations where we were all just waiting around way too long for the host to select something, which inevitably lead to a mass dropping of players as we tried to find a game currently running. It really would have been nice to institute some kind of automatic voting/countdown system in order to streamline and quicken the breaks.

That’s not to say it’s all doom and gloom with N.O.V.A. 3’s multiplayer. In fact, if you can get into a full game with little lag or bugs, it’s really a blast to play. The level design works well for the most part, and there’s certainly enough variety in game choices to keep folks occupied. There are enough players in a full game to really experience some decent firefights, and the inclusion of mechs and jeeps add to the fun (despite some iffy integration of the vehicles). Also, I’m glad to see Gameloft continuing the evolution of Armory-based unlockables as a key to encouraging replayability.

Unfortunately, there’s just too much variability in terms of match quality to unequivocally recommend N.O.V.A. 3 based on its multiplayer. The annoying glitches and matchmaking system don’t help and the lag is an issue that needs to be addressed. It’s a shame because the underlying advancement and build systems are solid with a large potential for customizability. I have no doubt that most of the concerns listed above can easily be fixed by Gameloft. However, for folks looking for a smooth multiplayer experience now, prepare to be disappointed.