For as many App Store games that I eyeball on a daily basis, I admit that something that has a lot of visual pop or a very distinct style will always catch my eye. Looks don’t always equal quality though, and I’ve been wooed by many an attractive looking title only to be disappointed when the gameplay didn’t quite follow through.

This is not the case with My Little Hero ($0.99). There are many titles out there that feel like iPhone games, but My Little Hero is not one of them. It has that shine that is evocative of games on a larger scale, and you’ll notice it from the title screen onward. It drops you into the role of a brave young boy whose friend Pinky (note: Pinky is your favorite stuffed rabbit) is kidnapped by the Boogeyman and spirited away into your bedroom closet. What will you do to save him? Why, don a cape and a helmet and follow him in there, of course. 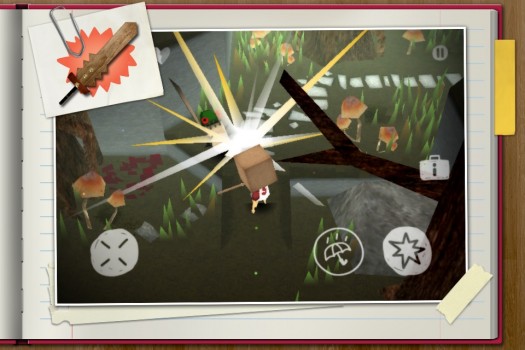 Gameplay is viewed from a 3/4 top down perspective and will remind you of Zelda in under a minute. It’s not just the whimsy of the style, but the layouts of the worlds and the movements of the enemies as well. As you search for Pinky, you’ll navigate you way through forests, swamps, deserts and eventually make it to the Boogeyman’s nest. Each of these areas is open world, although there is a clear path you can follow through each of them if you’re not in an exploring mood. The worlds have plenty of little sub-destinations on a cutely drawn world map, so it will take you some time to plow your way through while stabbing things with your wooden sword.

When you kill enemies (which are all cute, by the way), you’ll be rewarded with buttons, which can be saved to buy things later such as lollipops that will restore you to full health. Later down the line, you’ll score items as well, such a a trusty flashlight. My favorite part of exploring these worlds was saving my game, as I did so by approaching a little white nightstand that looks just like the one in my bedroom and pulling the light on the bedside lamp. It’s the kind of touch that makes you go “awwww" – and this game is chock full of them.

It’s hard to complain about much in My Little Hero, as it really stands out in the genre, but there was one thing I didn’t like and that was the absence of music in the levels. As adorable as the game is, I found myself imagining a silly soundtrack to go with it, and I felt its absence. The sound effects in the levels are great and just what you expect to go with the overall tone, but I think I would have enjoyed my journey more if I could habe bopped along to some tunes.

The other small detriment I noticed was that the level design felt a bit repetitive after a while. To counter this somewhat I tried playing it in bite-sized sessions so I didn’t burn out too much. It’s not poorly designed, mind you, but when something looks this standout, you expect it to come through that way on all levels, and I think I could have fallen madly in love with it if it provided a little more variety.

That being said, My Little Hero is still a fantastic game, and I had a great time playing it. What it’s missing in variety it makes up for with heaps of charm, and for the amount of content you get, it’s worth way more than a buck. The developers also promise more levels in the future, so eventually you’ll have even more worlds to conquer. If you even remotely loved Costume Quest or similar action adventure games, you won’t want to pass on My Little Hero.