It’s been over a year and a half since we last covered the boy wizard and his Lego debut on iOS. Now, after much waiting the adventure is finally ready to be concluded with Lego Harry Potter Years 5-7 ($4.99). While most Potter diehards will likely flock to this version and have a decent time, a few annoying missteps keep the title from having a wider appeal.

As was the case for the previous Lego Potter game, Years 5-7 is a port of an already existing portable game for the 3DS and more recently, PlayStation Vita. This means that you’re going to have (for the most part) a fully-featured game with a wealth of content. You’ll play through the final four movies of the series reimagined in the now-typical Lego way, each with its own chapters and sub-chapters. In addition, there are tons of unlockable characters as well as collectables. Suffice to say, there shouldn’t be any worries about getting your money’s worth with this title. 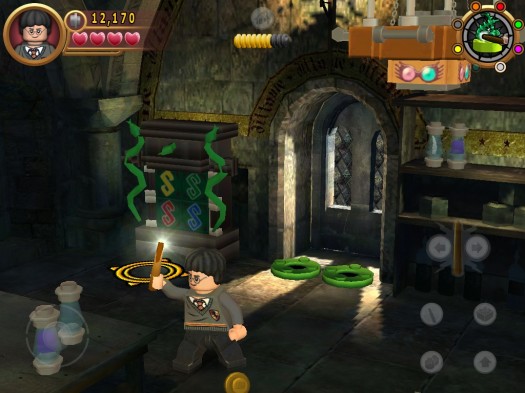 Gameplay is standard for what you’d expect from a Lego game at this point. You’ll spend the majority of the game engaged in simple exploration and puzzle solving, with some occasional combat thrown in for good measure. And, of course, you’ll spend a lot of time collecting studs which can be used to unlock new characters who have abilities that can open up previously locked areas. One new element added to the mix is the inclusion of Wizard Duels, which pits your character against another wizard in what is essentially a rock-paper-scissors battle for wand supremacy. While I didn’t think it added much to the overall gameplay, it was still a welcome sight for variety’s sake.

It feels strange saying this, but I was impressed with the visuals in Years 5-7. There was a certain clarity and visual sheen surrounding the in-game environments and character models on the iPhone 4S which put the game on par (or even better than) its portable console brethren. Unfortunately, the same can’t be said for the movie cutscenes, which were incredibly compressed. The audio suffers from a similar fate with annoying artifacts which simply feel out of place. 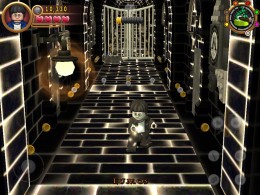 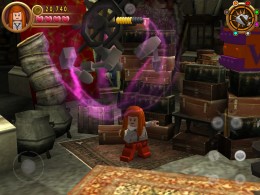 An interesting side effect is the fact that Years 5-7 will drain your iPhone’s battery very quickly. It seems like an obvious statement to make when you’re dealing with graphically-rich games, but I was still surprised at the how fast it drained (60-70% in about two hours of play). Just keep this in mind if you plan on a heavy gaming session away from a power source.

One of the areas we enjoyed in the previous Lego Harry Potter game was its intuitive control scheme, which used a more touch-centric (tap to move, swipes, etc.) method for controlling your character vice a virtual control pad. Unfortunately, Years 5-7 moves away from that style and settles firmly on a virtual joypad complete with various action buttons. While a virtual gamepad scheme is nothing new, the implementation feels off with small buttons that aren’t clearly labeled and the occasional non-register of a tap. Other actions, like specifically selecting a spell, become exercises in redundancy with the current control setup.

There are also a few nagging issues on top of the controls that just bring the experience down. The camera angle occasionally put you in a position where it’s hard to see pitfalls and other insta-death elements, causing sudden death if you’re not careful. I also encountered several situations where it was possible for your character to just get trapped on objects and just hang. Thankfully, the game will mercifully kill you after being this way for a while, but these sorts of bugs just shouldn’t be happening.

I’m happy to see that the Lego Harry Potter series finally completed on iOS. However, I’m not sure why it took so long for this port to land on the platform. Sure, Years 5-7 looks good visually, but the switch to a virtual gamepad along with the issues mentioned above deter the game from being better. As it is, the Lego gameplay is intact, meaning that fans of the series should continue to enjoy it. However, you can do better if you’re simply looking for the next great action/platform game.