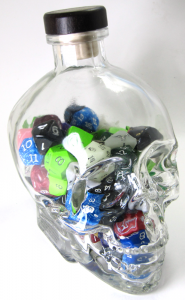 In a “good news/bad news" sort of situation, I always like starting with the good news first. Maybe it’s just me, but it makes the bad news easier to stomach. So, try this on for size: The Fighting Fantasy game books were originally first published in 1982, starting with The Warlock of Firetop Mountain and blossoming into a full-blown series of gamebooks. What’s a gamebook? Well, imagine one of those choose your own adventure novels from when you were a kid (You do remember those, right?) except with more interactivity. Instead of simply turning to page 92 to to jump across a pit or turning to page 59 to go down the tunnel to the right, you need to roll actual dice to do a skill check to see if you can make it across the pit.

This adds a great element of randomness to things, and it feels more like you’re playing the book instead of just making arbitrary decision along various branching paths. I like ’em a lot, and if you’re a fan of fantasy novels I’d go as far as saying this whole series is a “must-have," especially considering at the current sale price of 99¢ you can buy the whole set for less than one dead tree version will run you.

It doesn’t matter what order you play them in, so just download and start with whatever sounds the most interesting.

Now, the bad news. Big Blue Bubble, the developers responsible for bringing these gamebooks to the App Store, are on the verge of having their licensing agreements expire. It doesn’t sound like they’re being renewed either, so once these are gone, they’re gone. This also means there won’t be any updates for any of them, so don’t expect any Retina iPad enhancements, or tweaks/bug fixes if future iOS upgrades break the apps.

We’ve yet to hear when the licensing agreement actually expires, but needless to say, you should jump on these sooner rather than later if you want them.