Being a fan of Diablo-style loot grinds, I was pretty excited to try DevilDark: The Fallen Kingdom [$0.99], Triniti Interactive’s take on the classic dungeon hack and slash. For the most part, DevilDark actually does a good job recreating the experience with nice visuals and a decent amount of weapons and armor. Unfortunately, simplistic gameplay combined with some general miscues hold the title back from stardom.

DevilDark follows the story of a wandering (and clueless) adventurer that sets out on a journey to save the world from being ravaged by an evil demon, who had been unleashed by a power-hungry king years beforehand. You’ll slowly accomplish this by doing a bunch of quests that involve fetching items and taking down hordes of baddies. An occasional boss battle permeates the monotony, but for the most part, DevilDark stays close to its dungeon crawling roots. While I realize that narrative may not be the priority in such a game, I would have liked something more than the intro cutscene and what little I can glean from quest texts. 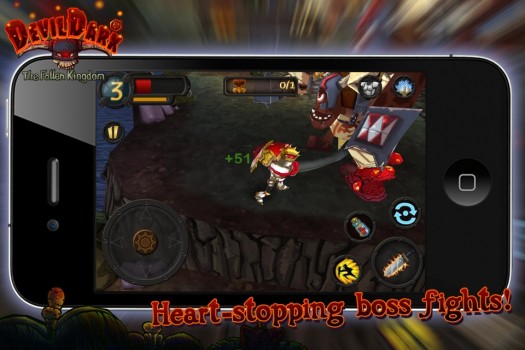 One of the keys to a successful dungeon hack and slash is a robust inventory. While DevilDark doesn’t provide the limitless customization of say a Diablo, there’s more than enough loot to keep you occupied. Additional features such as bonuses for wearing groups of armor as well as elemental infusion do a great job adding some much-needed customization. The inclusion of a slot machine that has the potential to toss out some high-leveled gear is a nice touch, as well. However, I wasn’t a fan of the fact that some weapons and armor required currency that could only be purchased via IAP. Suffice to say, these special items aren’t required to complete the game – just expect to grind a lot more to pick up the normal currency items. 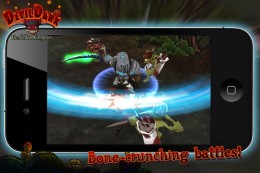 DevilDark’s visual engine is another standout feature in the game. The cell-shaded style looks great on Retina-enabled iOS devices. While Retina Display compatibility extends to the new iPad, please note that there’s currently a UI bug that’s been identified and should be fixed relatively soon. It’s also nice that items equipped on your character change his appearance. The music and character design do a decent job reflecting the overall tongue-in-cheek presentation, although the music does get a bit repetitive as you begin playing the same maps continuously.

Speaking of repetition, gameplay is quite simplistic, even for a dungeon hack and slash. There’s little in terms of additional abilities (which are tied to which weapon you wield) beyond simply attacking. In addition, DevilDark has a few quirks that, while hardly significant, still detract from the experience. For example, there are a lot of reused maps and assets which quickly become boring with the amount of grinding you’ll have to do. Navigation is also done via a static overworld map, which feels a bit disjointed.

Another annoyance is the fact that the game doesn’t warn you when you accidentally exit a map (and thus end the mission). Considering the camera angles can occasionally block the ‘world portal’ I had a few instances where I wandered into the exit and lost all of my mission progress. The lack of iCloud support is disappointing as well.

The pacing also feels a bit off. ‘Story-based’ missions seem to drastically jump in difficulty with the completion of each previous objective. While DevilDark offers plenty of optional missions to earn coin and experience in order to prepare for said story missions, I’m not a fan of the sheer amount of grinding necessary.

It seems silly complaining about excessive grinding when the goal of games such as DevilDark are to, well, grind. However, there’s a lot of ways to implement the grind that keep it interesting without messing with the core formula. If DevilDark had a more cohesive story accompanied by randomized maps and a little more complex battle system, it would be at the top of my list on iOS. As it currently stands, the visual engine and sense of progression are enough to merit a recommendation, but there is potential for it to be much more.