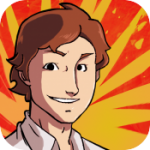 Being called a “Child of the 80s” has made me more aware of my mortality recently, than it has conjured memories of the actual time period.

These days you will be lucky to find any kind of media that doesn’t have 1 or 2 glassy-eyed teenagers waiting anxiously for “The Drop.”

Thankfully, the Wonder-Twin powers of Mighty Rabbit and Joystick Labs has manifested a game that absolutely drips 80s nostalgia and helps me forget that the twilight years are quickly approaching. Saturday Morning RPG (Free) is as close to a physical manifestation of my childhood as I am going to find, without a truckload of Pixiesticks. 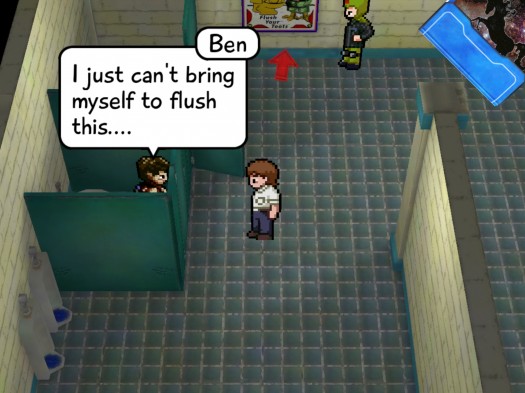 Inspired by the JRPGS of the 80s and 90s, Saturday Morning RPG is nothing special on the surface. Its battle system, littered with quicktime events that modify damage done and taken, is straight forward and pedestrian. In fact, the game’s story (the supposed hallmark of the RPG genre) has the literary alacrity of an R.L. Stine novel. Luckily, none of this matters. One would argue that that is exactly the point.

Episode 1 of Saturday Morning RPG (which comes free of charge) has the game’s hero, Marty, fast asleep on his bed. In his dream, he is spending the day with his sweetheart Samantha, when she is kidnapped by Cobra Commander Hood. Hood intends to wed Samantha, whether she wants it or not. After being beaten down by Hood and his minions, The Wizard (and his powerful glove – which is (so) bad) appears before Marty to offer help. He gives Marty his Trapper Keeper, the spell book Marty can use to defeat Hood’s Army and rescue Samantha. And that is what Marty (and you) set off to do. 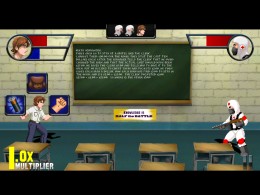 The Trapper Keeper enhances the vanilla battle system by throwing in spells and other wild cards. It’s first feature is customizable scratch and sniff stickers. Using up to five, the stickers provide benefits like +15 health or -2 Enemy strength for the length of the battle. The trick is that you have to scratch them to release their bonus, and you are only given a small amount of time at the start of the battle to do so.

Once the battle begins, your Trapper Keeper functions as your spell book. Spells vary from the mundane (a flaming basketball) to the awesome (a glittery-glove-clothed punch, delivered via Moonwalk). There are some balance issues that become apparent, such as getting more bang for your buck via spells and, therefore, not focusing on leveling up melee attacks, but I’m not sure the developers care. The actual gameplay is the plain cracker on which the aged nostalgia cheese is served. No one should complain about the cracker.

When you aren’t battling Lizards or Hood Soldiers, you walk 8-bit Marty around the episode’s environment (they are different in each episode) talking to people and, occasionally, collecting a quest or two. The quests don’t do much to flesh out the universe, instead trading lore for laughs. They vary from the eye-rolling “stop all the downloadin”, to the morbid task of setting animals free by flushing them down the toilet. Completed quests offer you either XP, Spells, or stickers, so they are worth doing when you find them. 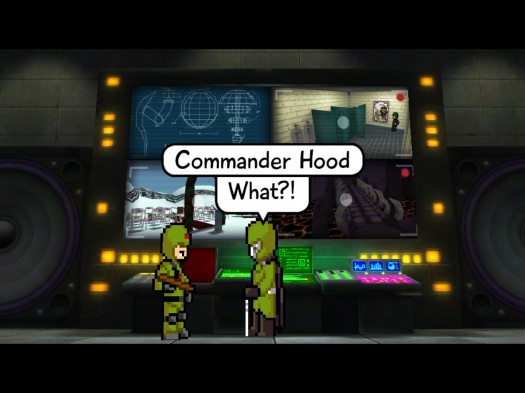 If there were any complaints to be leveled against Saturday Morning RPG, they would be the ones I’ve already mentioned. The game is a very basic RPG. Encounters are not random (your character and my character are probably going to be pretty similar by game’s end), quests and quest completions are very linear, and the story lines are pretty dumb. There just isn’t much substance here…much like a Saturday Morning Cartoon.

You and I could argue about this all day, but I don’t think we could argue as to whether or not you should give this game a shot. The first Episode, which took me 2 hours to complete (I try to be thorough), is completely free. If you like it, you can unlock Episode 2 for a measly 2 bucks. That, to me, seems like an awesome way to sell your game. More Episodes are in the pipeline of course, with Mighty Rabbit shooting for a May/June release for Episode 3.

All in all, Saturday Morning RPG is exactly what it promised. A fun, easy going, RPG with a heavy coating of 80s nostalgia. With an upfront cost of “free”, it’s hard not to recommend it.