While iOS has become a haven for a large variety of strategy games, good RTS titles seem to come few and far between. Enter Amoebattle [$4.99], the latest title from Grab Games. Hitting all the cues, Amoebattle does a good job providing a full RTS experience while making its own mark on the genre.

Amoebattle’s tale centers on your role as a new microbiologist exploring the microscopic world with the Amoeba Control System along with your AI assistant AMI. After some introductory research, you encounter rogue amoebas disturbing the ecosystem, which leads to a quest to discover the origin of these hostile beings. The overall narrative does an adequate job moving the story forward while not detracting from the overall experience. For most RTS titles, that’s all you can really ask for.

When it comes to gameplay, Amoebattle implements the standard RTS mechanics while infusing it with some novel elements. Missions are primarily linear advancement, with some stealth, defense and open-ended objectives thrown in for good measure. Amoebattle is also very unit-centric – there aren’t any buildings to produce units or gather resources. 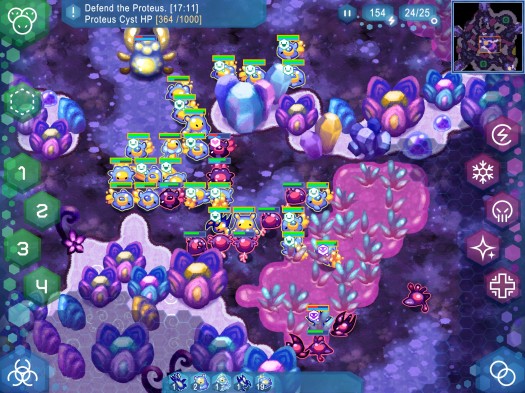 Instead, your amoeba can simply replicate if they have a full ‘Food Point’ (FP) meter and sufficient power. FP can be acquired in a variety of ways depending on if your amoeba is an omnivore, carnivore, or herbivore (each classification also affects other attributes). For example, carnivores gain FP exclusively through attacking other units while herbivores can eat various plants to build FP. While you can use a full FP meter to reproduce, it also bestows increased stats, adding to the strategy.

Power, meanwhile, is a secondary resource that is slowly produced in the background (but can be sped up by capturing fossil artifacts). Players can utilize power to replicate or to launch a variety of probes onto the battlefield. Probes range from slowing down opponents to infecting them with a long-term poison and work well in providing additional battle options. 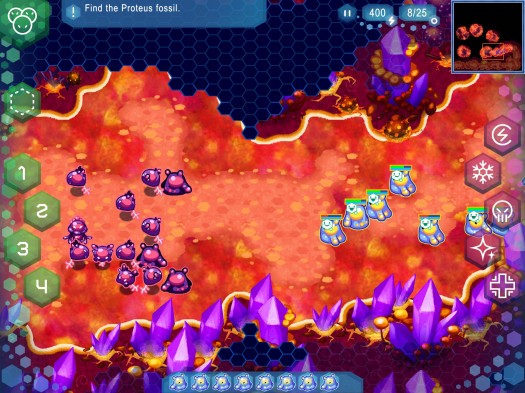 In addition to replication, your amoebas can also mutate into a variety of different units. Initially the unit pool is small, but as you journey through the campaign you unlock stronger and more varied units, each with their own stats and appropriate strategies. Mutation also requires power, meaning you can’t just wield it arbitrarily.

The above elements lead to a surprisingly deep gameplay experience. Each mission provides suggestions for completion, but as you unlock more options players can begin to experiment with different play styles. Whether you choose to bum-rush with close-range carnivores or utilize a balanced approach with ranged and support units, Amoebattle certainly keeps your options open.

Props also go to the control scheme, which offers an intuitive approach that works well on both iPad and iPhone. Amoebattle uses a combination of taps, drags, and scrolls (single and two-fingered) to control all aspects of the game. Admittedly, it’s a bit tougher to control on the smaller iPhone screen, but it still works surprisingly well. As expected, the game works best on the larger iPad screen.

There’s something to be said about Amoebattle’s difficulty. In short, this is one challenging game. The tutorial and introductory levels do an excellent job introducing core concepts, but once you reach the middle tier of missions, the game quickly stops holding your hand and leaves you to figure out the increasingly tough objectives. It’s important to note that despite the challenge, Amoebattle’s levels are fair. Just don’t expect to steamroll through all the levels with relative ease (especially if you’re new to RTS games).

Amoebattle’s other weaknesses are few, but do hold the game back from RTS perfection. The lack of a skirmish mode hurts replayability, as the game certainly has a deep enough system to make it enjoyable. The same goes for multiplayer, which would be perfect for this style of RTS. As it stands, Amoebattle has a decent amount of content with its campaign, but it would have been nice to have more to do outside campaign completion (besides achievement hunting).

Regardless, Amoebattle succeeds wonderfully at creating a touch-based RTS for iOS. When you take into account the deep gameplay, beautiful visuals (iPad-retina compatible, no less) and approachable control scheme, Amoebattle is a title well worth checking out and joins the short list of great iOS RTS titles.