Lately it feels like racing titles on iOS place a greater emphasis on realism (whether in visuals or controls) and less on simple, enjoyable gameplay. Retro Racing [$0.99] looks to rectify that with an emphasis on fun, fast gameplay that sacrifices depth for arcade basics. While Retro Racing suffers from being way too short, the experience it does offer does a good job taking you back to the days of classic top-down arcade racers.

As its name implies, Retro Racing harkens back to the old days of top-down pixelated racers. Each track is chock-full of turns, obstacles, and (most importantly) power-ups. Power-ups range from tires (which improve turning), to acceleration and top speed upgrades, to the standard nitro boost. While the goal of each track is to finish in third place or better in order to advance, you’ll find that later tracks essentially require you to focus on power-up collection (while navigating the tracks flawlessly) in order to have a chance at advancement. It plays like a simpler version of old-school console racers such as R.C. Pro-Am. 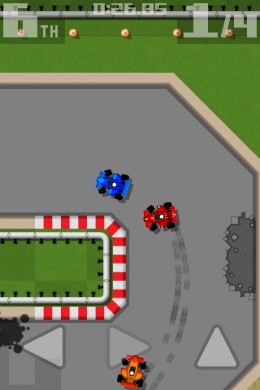 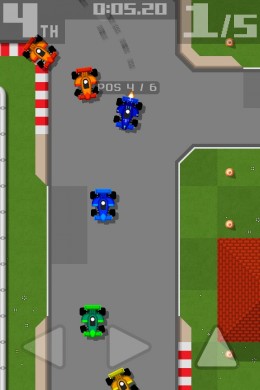 In this regard, I’m a fan of the gameplay in Retro Racing. There aren’t any deep elements such as a cash or parts system, but it does a good job recreating the classic racer experience, particularly with the limited randomness of the power-up system. The gameplay is fast and the controls are responsive, although they’re not exactly the easiest to maneuver with its limited schemes. Retro Racing is a portrait-only game which makes playing on an iPhone feel incredibly cramped, though it feels just fine on an iPad. It’s baffling that there isn’t support for playing in landscape mode, but hopefully that option can come in an update someday.

Another nice touch that Retro Racing offers is split screen same device multiplayer on the iPad. While I found the experience decent enough for the local play it offers, it’s (obviously) of limited use for gamers that primarily play with others via the internet. Still, it’s better than not including it at all.

Retro Racing comes with full leaderboard support. However, you’ll quickly find that in order to compete on the leaderboards, you’ll have to purchase the extra vehicles with increased stats (the game has three default cars with various attributes plus three souped up cars as a purchase). While the developer has stated that the game will eventually let you unlock them without IAP, the simple fact is if leaderboard chasing is your hobby, you need to shell out more cash.

Another complaint with Retro Racing lies in its longevity. To put it bluntly, Retro Racing is incredibly short. There’re only twelve total tracks, and each can be learned and completed in a short amount of time. Granted, there is some replayability even after completing all the tracks simply based on the aforementioned leaderboard competition. However, I don’t think it’s enough to sustain the game for very long. I really would have liked to have seen more tracks at launch, although features like online multiplayer or a track editor would have really vaulted the game into the spotlight.

At this point, Retro Racing is one of those games with a decent gameplay formula that could have been so much more. The developer has been pretty active in our forums and has stated that more tracks and possibly other wish list features will make it into subsequent updates. Meanwhile, Retro Racing is still worth checking out for fans of classic top-down racers, as long as you don’t mind a lack of substance and a tiny assortment of tracks.