Way back in 1984, English teacher-turned-game developer Mike Singleton released a vast and innovative adventure gamed for the ZX Spectrum home computer called The Lords of Midnight. The game was extremely well received and garnered high praise for its gameplay, the expansive world in which it is set, and its use of a clever graphical technique known as “landscaping" to render the scene with pre-scaled sprites. The Lords of Midnight turned out to be Singleton’s most well respected title and is considered by many to be one of the best video games ever created. 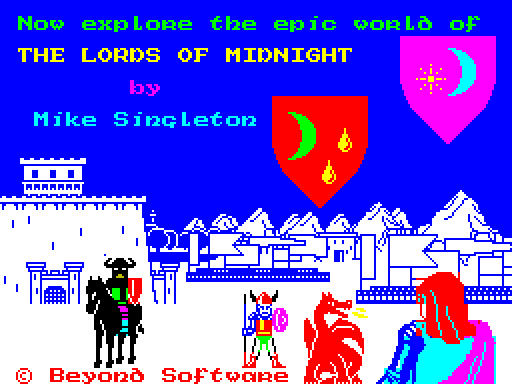 Versions of The Lords of Midnight were soon released on a few other (mainly European) platforms of the day, and in 1991 DOS PC versions of the game and its sequel, Doomdark’s Revenge, were released, originally developed as reverse engineered fan conversions by Christopher Wild. (Singleton gave his stamp of approval to Wild’s conversions — see Wild’s 2004 Retro Gamer two-piece article / interview with Singleton.) Not long after, Wild began thinking about doing Windows versions of the games and thus began his work on The Midnight Engine, a system that would allow the Midnight games to run under modern operating systems and, thanks to data abstraction, would also allow new games to be created under the same framework.

At this point, the astute reader has probably figured out that I am not just waxing nostalgic for the simple fun of it. No, I am happy to say that there is reason for my taking a few moments to bring the uninitiated up to speed, here, and that reason is a project that has been underway for over year now to bring The Lords of Midnight to iOS.

In January of 2011, original author Mike Singleton reached out to Christopher Wild, suggesting a collaboration to get his 27 year old classic in the hands of a new audience. Since that time, at a varying pace, the project has been underway.

Wild has been posting progress updates to his blog throughout the year, and indicates that it is definitely the intention of both he and Singleton to do this conversion just right.

Lords of Midnight is about the landscaping. It’s about those 2d panoramic views. It’s about moving some characters and pressing night and the end of the turn and waiting for the dawn to break to find out what happened.

So, the landscaping stays. Yes it will get an update. Graphically we will try a few things to help us justify bringing a 27 year old game back to the future. If you’ve followed the history of [The Midnight Engine] with the Lords of Midnight and more importantly Doomdark’s Revenge, you’ll have an idea of some of the things that means.

We’re going to make a few changes to the AI. Nothing drastic. This is not about turning Lords of Midnight into the style of RPG/Adventure games that are currently available. The AI in lords of midnight works – it’s a little simplistic, but it’s perfect for the style of game. However, there are a few little things that no longer sit comfortably, and to be fair, probably didn’t when Mike originally coded them. So there will be a couple of tweaks and additions.

The affect of these additions is that the game will not play like it used to. In spirit it will be the same, but don’t expect to be able to fire up the emulators and watch the old spectrum game play exactly like the new one. There will likely be some surprises, but I think everyone will enjoy.

Wild also indicates that certain AI changes will be made to facilitate multi-user gameplay and that it will remain turn-based like the original — not real-time. The picture that he paints of the conversion goals should appeal to those iOS gamers who loved the title in decades past.

The iOS conversion of The Lords of Midnight is being developed under the Marmalade SDK (née Airplay SDK), will run natively on both the iPhone and the iPad, and should make its way to various other platforms, as well. Doomdark’s Revenge will also be brought over, some time after The Lords of Midnight arrives.

The team has just posted a demonstration video, albeit preliminary and somewhat rough, of the game running on iPad hardware.

That a whole new generation of gamers will have easy access to such a rich classic is wonderful news, and rest assured we will keep readers apprised as progress on The Lords of Midnight for iOS marches on.

( Embedded screenshots are from the ZX Spectrum original and graphics in the demo video are placeholder — not final versions. )

[ via Gaming on the Go, thanks @gnomeslair ]