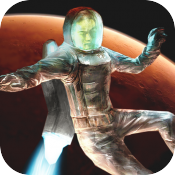 There are many ways to envision Mars. It could be a barren world, perhaps host to life once but certainly no longer. It could be a thing out of science fiction, teeming with hostile life we haven’t yet met. Or it could be the future of our species, our best hope to leave a planet growing ever-smaller.

Tiger Style imagines a future that brings us to Mars to discover the truth. As the developers of Spider, The Secret of Bryce Manor [$2.99], the company has a lot to live up to, but they don’t falter. In creating Waking Mars [$4.99], they have crafted another game built around storytelling. It is a brave game, one that is willing to think the best of us: that we could discover new life and seek to learn from it, not exploit it.

Liang, the star of the piece, is a Chinese astrobiologist who is part of a tiny team responsible for researching the red planet. This is done from a safe distance, with the help of rovers and computers. When the rover goes missing, it’s up to Liang to recover it. 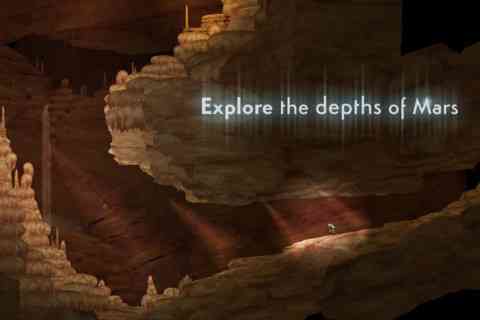 This means descending into Lethe Cavern, a Martian cave system that has only barely been explored. What should be a brief jetpack jaunt becomes an incredible journey. Liang encounters the Zoa, and begins to bring Mars to life.

The Zoa are Martian lifeforms, essentially plants. Tiger Style has researched and weighed every aspect of the Zoa ecosystem: each plant has its own dietary needs, soil pH requirements, vulnerabilities and biomass. Each contributes to the system in some way: one’s seeds feed another, one releases spores that prepare the soil of others, one predatorily dines on lesser types. A careful balance is required at all times.

The caverns are protected by cerebranes, Zoa that react to nearby biomass. Just as many plants need to be pollinated or processed by other species to reproduce, the Zoa need Liang’s help, and the cerebranes ensure he must give it. By raising the biomass in each cave, he can keep progressing deeper. 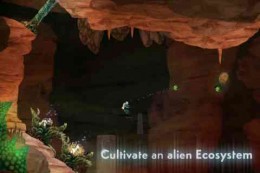 In practice, this means collecting seeds and planting them appropriately. ART, Liang’s A.I. companion, keeps track of biomass, tracking it with a five star system. Three is often enough to pass through a cavern, but five is better for reasons that will become clear as you play.

As Liang travels deeper into the caves, a larger story unfolds. It’s the story of the Zoa, and of Mars. It is not the story of Liang. He is stoic, quiet. He rarely discusses his own experiences. He is here to learn, to explore, and to complete his mission.

Aside from ART’s occasional interjections, Liang has one more companion: Amani. She stays back at Base Camp, reaching out to Liang with encouragement and information.

If I have one complaint about Waking Mars, it is this: Amani’s portraits don’t feel appropriate. Where the art is otherwise excellent, Amani’s is bold and out of place. Her portraits look a little too much like a series of stock photos. This is a small problem, but a jarring one.

But Amani herself is a welcome distraction. Early in the game, ART and Amani interrupt Liang’s journey near-constantly, walking him through all the basics. As time passes, they pop in less and less. The solitude of the caverns is a wonderful thing, enhanced by the game’s gorgeous soundtrack, but it’s also lonely in there, deep below the surface of Mars. On those occasions when Amani’s signals break through, it usually begins a much-needed moment of human connection. 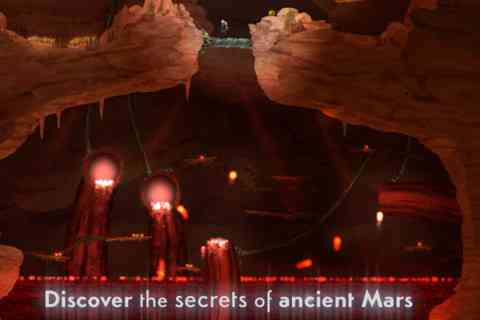 Otherwise, Liang is alone with the Zoa, working to build enough biomass to continue his journey. Each discovery he makes is noted in a research journal, each cave he visits is marked on a map. The only thing left to remember is the composition of each cave. At first, resources are plentiful. Later, you’ll need to revisit caves to find the seeds you need.

Waking Mars is never truly difficult. Some of the Zoa are carnivorous and must be avoided, but there’s no real penalty to letting Liang’s health drop. Similarly, some of the Zoa are very vulnerable, and can be killed. Keeping them alive is rarely completely necessary, however, as most caverns can eventually be brute-forced into growing sufficiently with enough persistence.

In place of difficulty, Waking Mars has intelligence. A clever game, it pushes players to contemplate its mysteries while they solve its smaller puzzles of ecosystem and biomass. Most of your questions will be answered by the time the curtain falls; in fact, I’d consider this one of the most satisfying gaming experiences I’ve had on this platform. Most of that satisfaction is down to the story and its presentation.

In the end, you’ll be left to decide the fate of the Zoa. Though the story can play out in multiple ways, there isn’t a wrong answer among them. You can always reload your final save to try things out differently. This is a blessing, one that lets you find every answer before putting the game down for the last time. This isn’t a game that will stand up to being replayed for most people, but at 6 to 10 hours it should provide entertainment enough.

Waking Mars has everything: a compelling story, beautiful environments, a gorgeous soundtrack and gameplay worth playing. Though it is, in some ways, less risky than Tiger Style’s last game (though I’d argue a game about a Chinese astrobiologist studying Martian botany is not completely risk free), it’s a worthy successor. Spider was an amazing experiment in storytelling; Waking Mars raises the bar on quality in long-form iOS games. Neither should be missed under any circumstances. Get this game. Whether you adore it as I do or not, it’s worth experiencing.