It begins with something out of a fairy tale. A little girl, Lumi, arrives at her grandfather’s house, but the door is locked, all the lights are out and her grandfather is missing. And it looks like something out of a storybook, with the environment expertly built out of paper and cardboard. But Lume [$1.99 / HD] gives us a tale for the modern era, a story of conservation and do-it-yourself ingenuity.

State of Play Games launched Lume on PC nearly a year ago, and now the game makes the move to iOS. The porting process has introduced a few frustrations, but for the most part this lovely little puzzle adventure has made the journey intact. Be warned, though—it’s a bite-sized experience, with less than an hour’s content at most. That span is charming, with a handful of intricate puzzles to work through. You’ll have to decide for yourself if that’s enough to make it worthwhile. It was just enough for me.

Lumi isn’t one to let a little thing like a power outage get in her way. She’s a resourceful heroine, and players are invited to be adventurous with her. The game plays like a classic point-and-click adventure, but on the small scale, across only seven screens. Tapping around moves Lumi to new places, investigates the environment, picks up tools and opens up puzzles. All of this tapping is done in the name of bringing back the light. 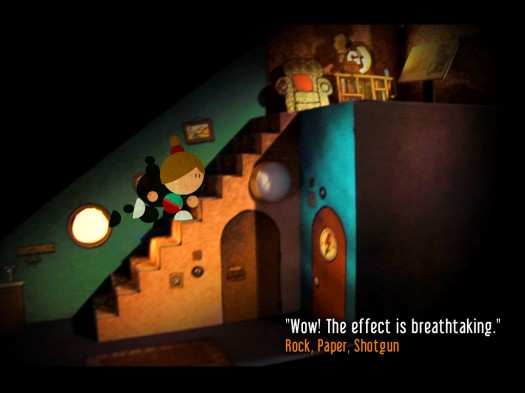 Tapping is also the biggest issue with this iOS port. While the PC version marks interactive areas by changing the cursor to a hand, there’s no such indication here. You’ll never know quite where to tap, and some of the interactive bits are small enough you might pass them by. This is one area where the game’s small stature is an advantage—it won’t take that much patience to find everything. There are two other hitches: the game ought to be locked to landscape orientation, as it’s not really possible to play in the tiny screen in portrait mode, and it ought not rely on manual saving. Replaying previously solved puzzles is terribly dull, so save often.

As Lumi works towards powering up the lights, she runs into several locks that bar her way, and each can be opened by solving a puzzle. The puzzles are clever, and each is unique. One is based on music, another involves rotating panels, and a couple more require cracking codes. They feel – they really do – like the sort of thing an eccentric grandfather might leave a curious granddaughter to challenge her. By opening locks, you’re not breaking into his private rooms, you’re proving that his faith in Lumi (and beyond it, State of Play’s faith in you) is well-placed.

I’ve mentioned that the game is gorgeous, and here’s why: the entire set is handcrafted. Movable elements, like Lumi and the puzzle screens, are animated separately, but everything else has been built with paper and cardboard and then filmed. This gives Lume a dreamlike quality, with deep vignetting and the sorts of pans and filmic scene transitions rarely seen in games. The soundtrack is just as beautiful, and deserves to be heard through headphones.

All of this builds up into a feeling of sincerity rarely encountered in games. There is no hint of irony in Lume’s message, and that makes it hard to disagree: self-sufficiency is admirable, and why shouldn’t it be? The game encourages conservation, but not by shaming or frightening its audience. Instead, it looks to make us proud of doing our best by the world and ourselves. It’s a nice feeling, to be honest, and it adds to the game’s already considerable charm. Lume may not be a lengthy experience, but it is most definitely a rewarding one. State of Play is working toward Part 2 now, and I, for one, can’t wait.