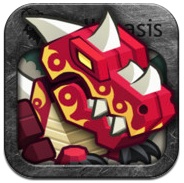 There are a few things I look for in a tower defense game. A good variety of towers, a mix of unit types to keep things fresh and level layouts that force me to be creative are all necessities, but those all come standard. It’s the little spark of something extra that makes a title standout in this otherwise rigid genre.

Elf Defense [$2.99 / Lite] has so many extras that it’s hard to know where to start. Ridiculously adorable style? Check. Special units you can pull out as trump cards? Sure thing. Items you can useto go after the creeps directly? Uh-huh. There’s even an overarching upgrade system so you can control how powerful and effective your towers are. Just one catch—most of these things are tied into a premium currency system. Drat. They were so close, too. 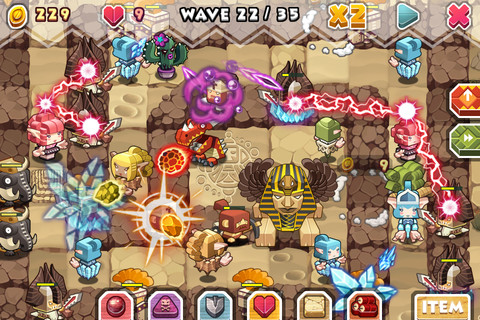 You can ostensibly manage everything with only the holy leaves you earn while you play. You get some for the creeps you kill and some for each level you complete. At first it’s only enough to keep you limping along with a few items here and there, maybe a mercenary or two down the road. Later you’ll earn leaves at a faster clip. It just never feels fast enough to truly take advantage of all the cool things you could get your hands on if you just shelled out money for more.

Still, there’s quite a lot to enjoy with just the initial purchase. Elf Defense has thirty levels, with two tiers of difficulty, followed by a slew of similar “crazy" levels for veteran players. The levels are set across three themes—forest, desert and arctic—with around 100 different enemies. That’s not to say there’s a ton of variety, though. The level layouts vary but stick within close thematic parameters, and the enemies only come in a few broad categories: ground, air, and bosses, with fast versions of each. 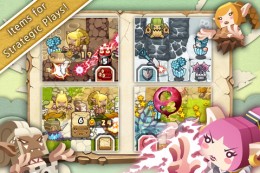 All the extras keep Elf Defense’s formula from stalling out early. The game is actually pretty hard, so it makes a lot of sense to save up to unlock a mercenary like Coldy Bear, with his triggered ability to slow down all the enemies on screen, or the poison spewing Peaker. Similarly, using one of your few shovels to clear the right blocked square might mean the difference between surviving a level or failing. With strict cooldowns on pretty much everything, unlimited resources can’t offer that much of an advantage.

The towers are all pretty great too, even beyond the fact that they start out as little plants and eventually grow into Elven Valkyries. All the classic tower archetypes are covered, and they all feel worthy of their niches. I’m particularly fond of the electrical tower, which shoots out huge bolts of lightning that arc between units. Upgrade it in-game and it gets crazy powerful while targetting more units at once. Spend leaves to research it between levels and its base power and range will increase further. This is true for all the towers, but none are quite as cool as a pink elf that shoots electricity from her head.

Leveling and shopping give players a broad selection of ways to spend leaves, but even without them you can customize the gameplay experience to taste. If the game moves too slow, run it at double speed. Fast waves will flit by so quickly they’ll skip frames. If even normal speed is too fast to keep on top of placement and upgrades, pause the game—you’ll still be in control. This might occasionally make the game too simple, but usually it’s a lifesaver. Even on Easy, you’ll need to plan your strategies carefully—especially if you want to earn the highest leaf rewards.

There is one other way to collect leaves: earn achievements. Each has a reward ranging from 100 to 1500 leaves, enough to keep you in shovels or bombs for quite some time. Sadly these aren’t tied to Game Center, which only tracks a single leaderboard for total score.

I’d recommend Elf Defense on looks alone (those square-headed elves have won my heart), but there’s a good game beneath the glitz as well. It’s just a bit frustrating that its approach to in-game currency is so mercenary, because the game would be more fun with more freedom. Still, if you’re looking for a hefty tower defense title and you’ve got an appetite for darling designs, you ought to check this out. If you do, stop by and share your thoughts in our discussion thread.