There’s nothing like a freak ice storm to make me crave a tropical vacation. Warm, sandy beaches, gentle ukulele music, streaming sunlight, being fired from a slingshot in an attempt to rescue a captured princess—there’s really no substitute. I guess the closest I’m going to get for now is playing Brave Beak [Free], a tropical adventure with an island soundtrack that just might help me forget that I’m a hollow shell of a person waiting for the barren landscape to crack and bring even a glimpse of the glorious spring that is to come.

In Brave Beak, you control a cranky little parrot on a mission. You must direct him through a tropical paradise knocking down obstacles, freeing prisoners, collecting treasure and gobbling up fish, rainbows and even bits of the moon to keep his energy up and save a captured princess. I’m not sure why the bird is so very, very cranky (perhaps the pressure of being a parrot forced to fly through space itself and rescue a princess single-wingedly got to him), but during the course of the game a lot of valuable island real estate is damaged, ships are sunk, and (in a move sure to…ruffle a few feathers) local wildlife get unceremoniously slapped out of the way. 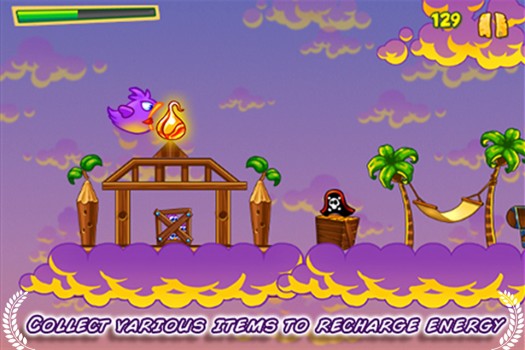 At first glance, Brave Beak kind of looks like an Angry Birds/Tiny Wings hybrid. You’re fired from a slingshot, knock down precariously stacked structures, and tap the screen to keep your bird aloft. When playing, however, it doesn’t feel like either of those games. In a way, it feels almost like a Super Mario game, right down to the coin collecting aspect…if Mario was, uh, actually a bird, flew around instead of jumped, and ate fish all day long.

The controls are incredibly simple. Tap the screen to send your bird higher through the clouds, let go to plummet towards the ground. The higher you fly, the more energy you use, and if you run out completely you fall unceremoniously to the ground and the level is over. You can replenish your energy throughout the level by eating fish, coconuts, rainbows (yes, really) and more. Additionally, you can make your energy last longer through the judicious use of elements the game gives you, such as kites, ramps, and hammocks to catapult you further through the levels while giving your wings a rest.

In a page out of Jetpack Joyride‘s book, each level has a set of objectives that you must complete in order to move on. These objectives range from “collect x amount of x” to subtle introductions to game mechanics such as “taste the rainbow,” alerting you to ways of better playing the game without boring, obtrusive tutorials. And since it’s unlikely that you’ll complete each objective your first run (flight?) through a level, the replay value is high, with minimum frustrations.

In addition to the story-progressing objectives, there are other challenges you can undertake too. Each level has five gold coins to collect, and there are various items with different properties to help extend gameplay, add points, and otherwise enhance the game. There’s a feature that enables you to send messages in bottles to other friends playing the game, which they pick up during the course of their own adventures. It’s kind of a fun way to interact with friends over the game (on top of the standard “I’m pwning u on the leaderboards” way), and it’s these touches that kept me replaying levels despite having already beaten them.

Overall, the game quality is so high and the gameplay so fun that it was well worth the download for me. Now, if only future updates could somehow make one of those fruity drinks with all the umbrellas appear next to me (preferably in a coconut bowl with a Krazy Straw), it would be pretty much near perfection.