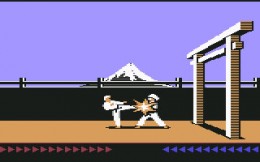 And some say the world is a cold, passionless place. Thanks to a hip angel investor, the visionary behind Prince of Persia, Jordan Mechner, is getting a shot at remaking and re-imagining Karateka for release across multiple downloadable platforms.

In a blog post, Mechner says that he’s been working on the new Karateka with a “small team" for over a year. It’s a passionate write-up for the most part, and the reason is plain: this was his first published game, and it’s a legendary one to boot. The side-scrolling action might have been simple, but the title caught fire. Since its debut on Apple II, it’s been ported to roughly sixteen quadrillion different platforms.

Firm details are impossible to find at this point, but we do know that this is a re-make that will blur the standard lines:

Let’s talk platforms real quick: in numerous interviews, Mechner has confirmed that this is slated to hit XBLA and PSN. Over Twitter, Mechner told TouchArcade that he ‘hopes’ an iOS version can happen. For the record, we do, too.