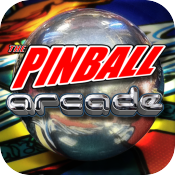 We didn’t have a lot of arcades in my hometown while I was growing up. Even worse, the few that did exist specialized in video games and air hockey, with nary a pinball machine in sight. Still, whenever I managed to get my hands on a one, it was always such a dazzling experience of light, sound and skill. Perhaps that’s why I can’t stop playing Pinball Arcade [$0.99 / Free], the inaugural iOS title from FarSight Studios. FarSight’s ability to create near-perfect replications of actual pinball machines leads to a game that is not only full of incredibly deep pinball machines, but also captures that feeling of fun and excitement in an iOS game.

As its name implies, Pinball Arcade features classic arcade machines from various eras with the simple goal of mastering each one to get the highest scores possible. Each table also includes ‘Goals’ (read: achievements) that can be solved which lead to more complicated objectives. The entry price includes one machine (‘Tales of the Arabian Nights’) with three more available for purchase within the game via IAP. Tables range from somewhat simple layouts with interesting twists (‘Black Hole’) to lengthy epics chock full of interactive items and objectives (‘Ripley’s Believe It Or Not’). Unlike most games with IAP, you can actually try each table before you buy, providing an opportunity for actual research before you even consider purchasing another table. 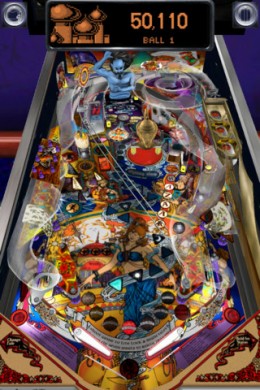 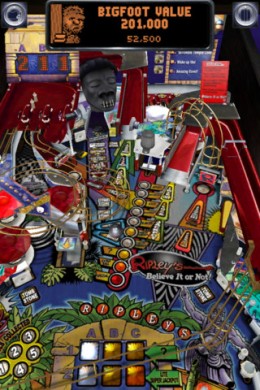 I’m impressed with how much effort Pinball Arcade seems to puts into recreating each machine. The visuals, sounds, and effects all feel authentic and add to the presentation, although there is some minor blurriness while playing on an iPad 2. The physics, while occasionally unforgiving, seem to offer a good balance between realism and challenge. What I admire the most, however, is how much Pinball Arcade offers in terms of knowledge for each table.

When you select a table, you’re given a brief history, the option to view an actual flyer (some are pretty low-res) and a comprehensive instruction manual detailing every single objective you can do in a table. The game really wants you to learn, live, and master each table –a concept that I can get behind. Of course, the game works well for the casual player that just wants to play a quick game, but I feel some of the charm is lost experiencing this game in that fashion. 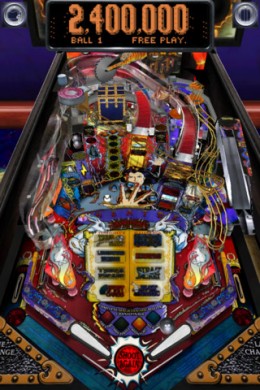 Most importantly, Pinball Arcade simply hits the mark on gameplay and the feeling of actually playing a pinball machine. Whether you’re balancing a multi-ball run, trying to execute a combo or objective, or finally unlocking the ‘end game’ big score objects, all the experiences just feel real, something that doesn’t happen very often to me while playing an iOS game. Even better, since each table has its own personality and can take a long time to master, there’s tons of depth for replayability. I was also impressed with the variety of table selection, although I wasn’t the biggest fan of ‘Black Hole’ (too simple and gimmicky for my tastes).

While Pinball Arcade nails nearly every facet of a great pinball game, I did have some issues with its leaderboard integration. The game exclusively uses Facebook to track high scores, which seems rather cumbersome in my experience. This is further evidenced by the fact that even simple acts like checking the leaderboards seem clunky and slow to update (that and I haven’t yet seen one of my scores upload). I understand that lots of folks use Facebook (and it appears that route was pursued for cross-platform leaderboard support), but simple Game Center support feels like a prerequisite in this day and age. IAP is another aspect that just seems confusing; why the game asks me for both my Facebook login and .mac account when trying to download purchases on another device is beyond me. The whole structure feels mismanaged, which is surprising consider the quality of the rest of the game.

There’s also a potential minor problem in regards to approachability. The large amount of information and instructions for each table is certainly wondrous for enthusiasts, but it may be a bit intimidating for the casual pinball player.  While I thought the IAP price points were fair, I imagine some would balk at having to pay ten dollars to fully unlock all four tables. There’s also the fact that these tables are complicated and actually require some effort to learn and truly enjoy.  I’m sure casual players could simply pick up the base game and play free versions of the other tables, but as mentioned before I feel like a lot of the magic would be lost on them.

However, I feel that some of the concerns above are nitpicky at best. In addition, folks on our forums have stated that the developers plan on integrating Game Center soon, alleviating my most pressing worry. Regardless, Pinball Arcade is simply one of the best pinball games I’ve ever played, and should be put at the top of the class with other iOS pinball elites. Each table is digital masterpiece onto itself and should make pinball enthusiasts very happy. Furthermore, with the promise of many more tables in the queue (most likely as IAP), this game should keep you entertained for many balls to come.