It’s not often I can be completely sucked into a world on the tiny screen of my iPhone. Don’t get me wrong, it happens, but in the back of my mind I always know that there are dozens of other games waiting for me at the press of the Home button, all ready to feed my ADD-riddled gaming habits at a moment’s notice. It’s like I can never fully forget all the cool stuff my iPhone is capable of long enough to get lost in a game for any great length of time.

That certainly isn’t the case with The Hacker [99¢], though, a story-driven faux hacking game from developer Angry Bugs. When I fire it up, my iPhone is transformed into a Glider OS-equipped computer that becomes my gateway into an international tour de hacking which leads me to uncover a devious plot involving my former employer. It’s far from the first game to let you take on the glorified role of a top level hacker, but it executes the idea incredibly well and offers a fantastic level of immersion with a fairly compelling story.

The Hacker starts with you trying to log into the Glider Operating System on your computer, an OS you helped develop as an employee of Glider Corp. You’re notified on the screen that several things failed to install properly, but you finally boot to the desktop. When you try to connect to the ‘net, you’re denied, and then contacted via email by someone who claims to be a former coworker. He is one of a handful of developers, including yourself, who worked on Glider OS and were unceremoniously fired shortly before it was set to launch. 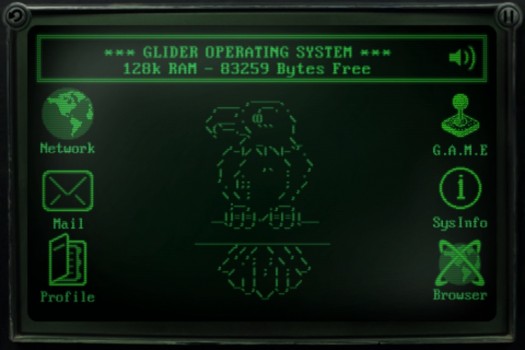 He informs you that he’s discovered a trojan in the Glider OS and suspects that Glider Corp is up to something shady, and since you have experience with the software he recruits you to join him and several other ex-employees in hacking into Glider Corp’s system and getting to the bottom of things. From there you’ll go on to experience several twists and turns as you dig in and discover just what Glider Corp is up to.

The coolest thing about The Hacker is that it hardly ever breaks character in terms of presentation. It tries to simulate a computer you might find from the late 80s with a green monochrome screen and very basic graphics, and it does it very well. There’s rarely a time when navigating through the game that you don’t feel like you’re actually operating a computer (minus the fact that everything is touch enabled, of course). This level of detail is very cool for people who remember when computers looked like that, but a younger generation might not appreciate such a low-fidelity presentation. 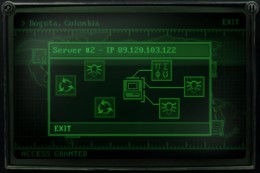 The Glider Corp system is spread across 8 servers around the globe, and the way you “hack” in into each one is by completing various types of mini-games. These are mostly just logic puzzles disguised as computer-y things.

For example, one type has you moving little nanomachine bugs onto trigger pads placed on a circuit board in order to “open the ports” into a server. The catch is that all the bugs move at the same time, and you’ll need to use objects on the board to get each one into the proper position to have them all be on their respective pads at the same time. A couple of the hacking games use similar mechanics to the classic Pipe Dream, like creating a path out of sections that will lead power to a set of dead nodes. Outside of the server mini-games, another bit of hacking lies in “decrypting” emails by completing a slightly altered version of a lights out game.

The mini-games aren’t necessarily anything groundbreaking, but they are really fun and can be quite challenging. It makes you feel like you’re doing real work by putting your brain to use and then being rewarded with an unlocked server and a new part of the story. I won’t spoil too much, but there is definitely more beyond the 8th server including some very cool secrets and surprises. 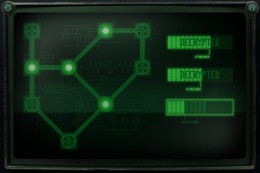 If you finish the initial 8 servers and still want more you can choose from 3 new areas to buy as in-app purchases for 99¢ each. These 3 areas each have 5 new servers to hack into, and completing each area will lead to some periphery story bits and additional secrets. There’s also Game Center achievements and leaderboards for every area as well as an overall leaderboard.

Doing pretty much any kind of hacking will earn you experience, which acts as an in-game currency. You can pay a bit of XP to pass a mini-game if it’s giving you trouble, or buy an assortment of sweet backgrounds for your virtual desktop that feature ASCII artwork. These definitely bring a nostalgic tear to my eye. But the coolest thing you can spend XP on is unlocking arcade games from the G.A.M.E. portal on your desktop. These playable games include takes on familiar genres like snake, brick breakers, shmups, cave flyers, and dodging games. There’s even a hidden platformer game in there too (but you’ll need to find it yourself).

There aren’t too many things that I didn’t like about The Hacker, but there were a couple of issues that stuck out. There are a ton of spelling mistakes throughout the game, which on the one hand feels a bit sloppy but on the other sort of fits perfectly with a game based around communicating with people over the internet. Our grammar has certainly suffered since the rise of the internet age.

The other problem I encountered was an inconsistent difficulty. The mini-games appropriately get more complex as the game progresses, but at several points no matter where I was in the campaign I ran into puzzles that stumped me for a frustrating amount of time. Then, after finally figuring out the solution, the very next puzzle or two I would beat in a matter of seconds. It could be that’s just how my own particular brain handled certain challenges, but to me the difficulty curve felt kind of choppy.

While at its core The Hacker isn’t much more than a collection of mini-games, the fantastic presentation and little details really pull you in. The story might be a bit cliché, but the way it’s gradually revealed to you as you access each new server compels you to keep hacking away to learn what happens next. Plus, the mini-games and accompanying arcade games are really pretty fun on their own, and can be played over again as many times as you want just for kicks or to earn some extra XP.

Above all else though, The Hacker does a great job at making you feel like a bad ass international hacker, which is what it should really all be about anyway.