I avoided the movie Snakes on a Plane because the premise of reptiles causing an aerial ruckus seemed a little lame. So my expectations were equally low for Gorilla Gondola [$1.99], a game about a silverback gorilla who’s riding on the roof of a moving gondola. But fortunately it turns out this debut iOS release from UK developers Electric Pixel Factory is pretty entertaining.

The word “Gondola" has a few different meanings. To clarify, this gorilla is not riding on a flat-bottomed boat in Italy or an open railway freight wagon (that would be ridiculous). It’s actually  standing on top of a ski-gondola on a cable, which moves along automatically. By swiping up or down with your finger, the Gorilla jumps or stomps. The further and faster you swipe, the stronger it’s movements, causing the ski-lift to rise and fall.

Why jump and stomp? Because it helps him reach yummy bananas and power-ups like banana magnets or rising helium balloons. It also helps you use the gondola to squash “agitated birds" (which resemble certain fat Angry Birds) or to bounce the ape and gondola over or under approaching obstacles. The ski-lift doesn’t explode after a crash, instead it gets snagged and you’re given an opportunity to quickly tap the screen to destroy the blocking obstacle. If the snagged ski-lift moves off the left of the screen then you lose a life. 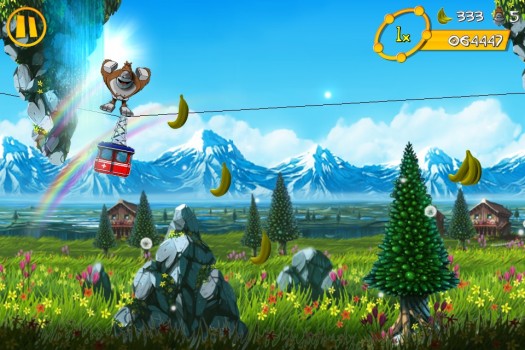 If the bananas or mines are slightly to the left or right, you can tilt your device to swing the gondola. As it sways, the gorilla totters, but don’t worry he never falls off. I’m not generally a fan of games that involve simultaneous tilting and swiping, but it felt appropriate – although your hands might tire after a long session of tilting, swiping and tapping.

The eight levels start with a tutorial and include the ‘Crystal Caves’ which feature stalagmites and giant mushrooms to avoid, the underwater ‘Reef’ and a gondola in space. Each level is dynamically generated, so the layout is different each ride. There’s also a variety of soundtracks, including one with distinctive lyrics in a deep voice: “Go-Go Gogo Gorilla! Do it! Oh yeah!!!"

Gorilla Gondola uses an interesting approach to unlocking levels by requiring a set of objectives to be satisfied. For example, collect X bananas, clear X gates and clear X obstacles without crashing. Some of these objectives can be earned across multiple games, and it tracks your progress as you go. This approach to unlocking levels is slower than many other games, but also  makes unlocking a level feel more rewarding. Especially the “Factory" level which has eight objectives to satisfy before it unlocks, including reaching certain scores on earlier levels.

Timing your jumps right is a skill which improves with practice, as the screens become increasingly full of explosive monkey-mines, fans to activate with a tap, bonus gates for the gorilla or gondola to pass through, and lasers. The levels are quite long and contain roughly  5 sections, so it can feel frustrating when the screen abruptly becomes cluttered with mines and causes multiple deaths in quick succession, sending you right back to the start to try again. Personally, I’d rather finish the entire Gondola ride each time and receive a lower score.

The Game Center scores are based on obstacles passed, bananas collected, the number of enemies and gates, and your overall awesomeness. How do they measure awesomeness? Dean from Electric Pixel Factory explains:  “If you collect all banana’s, clear all gates, kill all birds and clear obstacles with maximum risk (i.e – closest possible distance) then you will be 100% awesome. Missing bananas and ramming obstacles will gradually chip away at your awesomeness."

Gorilla Gondola is a quality release, with responsive controls, good graphics and energetic music. The gameplay feels fresh and there’s definitely skill involved with bouncing the gondola through the tight spots. The way multiple objectives are used to unlock levels feels well-balanced and is rewarding, providing an incentive to keep that fearless Gorilla jumping and stomping.