Depending on how you look at it, my weekend was either a complete success or a disastrous waste. Asides from my daily ablutions, I’ve done nothing but sit on my derriere and play Capcom’s Ghost Trick: Phantom Detective [Free]. It’s true. I’m not ashamed.

I would be ashamed if this was a cheap rip-off stemming from some copycat’s attempt to cash in on a popular indie title somewhere but Ghost Trick: Phantom Detective isn’t that sort of game. If you had to liken it to a gender-unspecific trophy spouse, Ghost Trick: Phantom Detective would be a 6’2" Scandinavian model with a degree in rocket science and a part-time job as a professional comedian. You won’t be ashamed to be caught with this one. 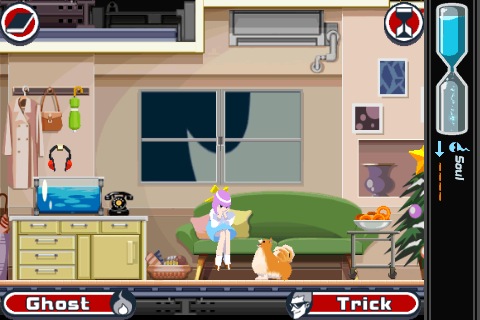 What? No? Fine. I see those raised eyebrows and I’ll raise you with a more thorough explanation. Ghost Trick: Phantom Detective is the long-anticipated port of an adventure game Capcom developed for the Nintendo DS. The titular character in this eccentric little delight is, as you might have guessed already, sort of dead. Sissel is also sort of awesome for an amnesiac red-suited ghost with a bad haircut.

Unlike most of the recently deceased, he has to navigate between the Land of the Living and the Ghost World. Sissel can also traverse telephone lines, perform minor feats of telekinesis, communicate with certain living beings (we’ll get to that in a bit), and go back four minutes in time to avert untimely deaths. (Sadly, that’s only applicable for everyone but himself.)

Incidentally, you’ll find yourself using that last power a fair bit. The supporting cast is somewhat uniquely skilled at dying repeatedly. At least, one of them is. 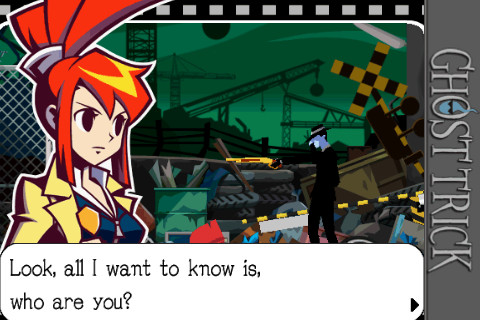 Meet Lynne. She’s a somewhat bombastic little redhead of a detective, the sole witness to your murder and – according to the helpful desk lamp (yes, a literal desk lamp) you meet in the introductory sequence – the key to deciphering the circumstances behind your posthumous condition. Needless to say, you will spend a lot of time rescuing her only to watch her barrel headlong into yet another humorous tragedy.

Along the way, you will also meet the rest of the highly memorable crew. From an unbelievably adorable if loud-mouthed Pomeranian (To quote our very own Mr. Nicholson, “Just wait until you meet the dog, man!") to a shotgun-wielding assassin (His name is Nearsighted Jeego. He never misses his target if they’re in range.) to a slow-witted prison guard who dances when distressed, every entity you encounter in Ghost Trick: Phantom Detective is, uh, unique, to say the least. The development team definitely went all the way with the character design here.

(For those of you curious about how well Ghost Trick: Phantom Detective survived the transition to the iOS, I’m happy to say it looks pixel-perfect. While I’ve never played the original, I’ve seen the videos and if the videos are any indication of how things were, well, Capcom did you proud.) 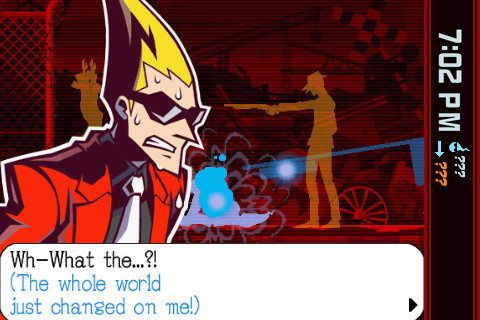 Humor-wise, Ghost Trick: Phantom Detective is about as off-kilter as the menagerie that populates it. Facepalm-inducing moments are in abundance. The actual plotline, on the other hand, is deeper than what the initial twenty minutes might implicate. How so? I can’t tell you. Games like Ghost Trick: Phantom Detective are kinda like Fight Club. You don’t talk about Fight Club. You don’t talk about games like this either. At least, not in the context of the plotline, the actual dialogue and whatnot. Not unless you want to peel away some of the magic. The only thing you’re getting out of me on this front is the assurance that when the bleaker moments of the game hit, they will hit hard.

Of course, a good story’s not much without decent gameplay. Though marketed as an adventure game, Ghost Trick: Phantom Detective feels more like a puzzler sequestered away in a visual novel. When you’re not otherwise thumbing through conversations, you’ll be in what the game calls ‘Trick Time’.

To make this a little easier to understand, we’re going to use an example here. Let’s say you’re inside a flag and you have to make your way across the room to get something. In order to accomplish this, you’re going to have press the ‘Ghost’ button, switch to the Ghost World, and then draw a line from the flag to, say, a pitcher of water. Sissel will then do the rest. Interacting with objects is just as easy. For example, if you’re inside a candle and the words ‘burn brighter’ are present on your side bar, all you need to do is switch to the Land of the Living and hit the ‘Trick’ button. Once again, Sissel will take it from there.

The puzzles themselves are a lot more complex and likely to leave you going, ‘Wait. So, how am I supposed to use two suits of armor, a set of curtains, a globe and a framed-up sword?’. To complicate matters even further, there is often a time limit associated with these puzzles. Luckily for you (and everyone else in the predicament), Sissel can rewind time as many times as he likes, something that makes Ghost Trick: Phantom Detective nicely balanced between the realms of ‘forgiving’ and ‘why would you do this to me?’.

While we’re on the topic, here’s my only other infinitesimally tiny issue with the game. It’s too linear. I know, I know. This isn’t some sprawling, open-world sandbox of an action-RPG. However, they’ve done such a superb job at developing the environments that I kind of want to spend some time away from the main storyline. Ahem. If you haven’t guessed it already, I think Ghost Trick: Phantom Detective is the bee’s knees and with the first two chapters available for free you should definitely give it a shot. Following that, you shouldn’t have too difficult a time parting with the cash to unlock the rest of the game.