I like to imagine there’s an Oberlin burnout somewhere who’s made a living getting bent on ayahuasca and pitching music-history based games to different companies. My hypothetical game designer, wide-eyed and euphoric, is responsible for games like Boom Boom Rocket, Eternal Sonata, Jazz: Trump’s Journey [$2.99], and now Frederic –Resurrection of Music [$1.99/HD/Lite], by Forever Entertainment S.A.

In the first scene, set in present-day Paris, Fryderyk Chopin climbs out of his grave, speaks with the Muses, and rap-battles a French DJ with dual-wield keyboards and a jetpack. After this, he rides a horse-and-carriage to Jamaica and gets high with a reggae artist named Rob. Amazing. 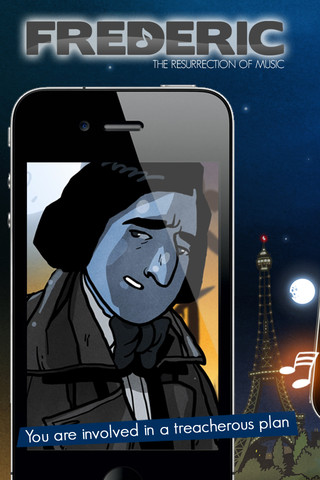 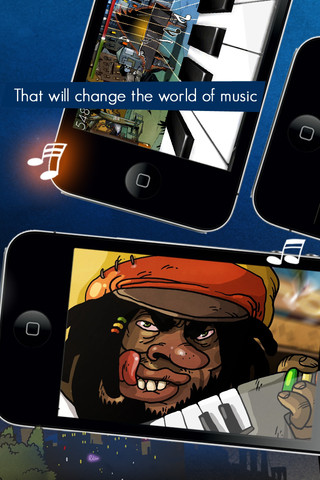 As he travels the world in his mystic carriage trying to unravel the circumstances of his undeath, Chopin runs through a series of musical duels with local artists. Mechanically, this translates into a rudimentary version of Piano Hero: notes travel on a track toward a touch-screen piano keys, and players are scored on their accuracy and combo streak.

The songs in Resurrection are modern remixes of Chopin’s most famous waltzes, nocturnes, études, and marzukas, re-imagined in the style of whichever locale our hero finds himself: country in Texas, Celtic dance in Ireland, chiptunes in Tokyo. I actually like most of the music — the Resurrection soundtrack is available for purchase on iTunes [$5.99] — but they all tend to suffer from repetitive melody and relatively simple arrangements. Still, the lighthearted pop remixes fit into the game’s absurdist aesthetic much better than an orchestral score would. 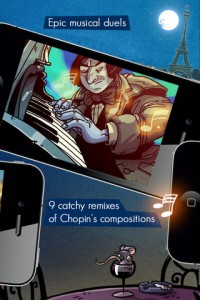 With only nine songs, Resurrection is relatively short, though some players might be able to extend its shelf-life by trying to improve their scores. But even on its hardest difficulty, at its most complex, Resurrection goes out of its way to indulge and empower the player, not defeat them with impossible challenges.

Like Climber Brothers [$0.99], the real joy of Resurrection is the one-to-one relationship between tactile input and feedback: tapping the screen of my iPad is more or less a reasonable facsimile of pressing down a physical key. This is a relatively simple pleasure, but Resurrection goes to great lengths to extend it by being overly-generous  in its design — players have a relatively large window to hit notes in, and it’s almost impossible to miss enough notes to fail a song. The goal here is to listen to the music and soak up the strange animations going on in the background.

Since failure — and, by extension, most of the game mechanics — is largely an illusion, Resurrection‘s real hook is its insane premise and matching art direction. In both its art direction and treatment of ethnic stereotypes, Resurrection draws on the bande dessinée style of mid-80s Lucky Luke. The voice acting, too, is hard to place: British English re-routed through Forever Entertainment’s Polish roots.

But Resurrection‘s essential Europeanness isn’t limited to animation and cut scenes, and this isn’t a game so much as it is a rewriting of Chopin’s cultural identity. During the Cadet Revolution in 1830 Chopin, the son of a Franco-Polish immigrant, fled Warsaw for Paris, never to return. Resurrection ultimately leads him back to a culturally reinvigorated Warsaw, but only after he uses his musical gifts to destroy the stereotyped, corporate shills that populate the rest of the world. Chopin is cast as the savior of music, but it’s odd that he uses modern remixes, not his traditional compositions, to further his cause.

By fudging its rhythm mechanics, Frederic — Resurrection of Music actually presents itself as more of an interactive cartoon than a game. But when viewed as such, Resurrection often comes off muddled and directionless and, even at the end of the game, it’s not clear why Chopin was resurrected, who he’s “saving" music from, or if he really succeeded.

Nevertheless, Resurrection is a bold product, unafraid to be campy, kitschy, and surreal, and presented as a labor of love from a team full of ideas. This game is larger than the sum of its parts and everyone I’ve showed it to has enjoyed basking in the art and music and in the fact that Frederic Chopin uses his second chance at life to smoke dope on the beach and learn the keytar.