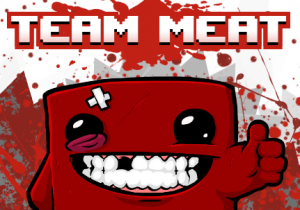 Super Meat Boy creators Team Meat have been critics of iOS devices as well as the App Store itself for quite some time now. If you want to get up to speed, the best place to start would be the Team Meat Blog where Tommy Refenes goes over his GDC rant session, including the Zits n’ Giggles pricing drama, and more. Tommy also mentioned, “I have no intentions on doing anything for iPhone or iPad ever…I hate the platforms and I hate the stores." Well, per a recent interview with IndieGames.com, Team Meat has changed their tune to “The next game will probably be iPhone. Probably."

…And that’s all we know about it currently. I really just hope that whatever their next title happens to be is actually a game and not another App Store troll like Zits n’ Giggles. There’s some serious talent at work in Team Meat, and I’m really excited to see what they can do with iOS devices.

Oh, and if you haven’t yet, consider this your official reminder to download Super Meat Boy. It’s available on the Mac, PC, and the digital download area of home consoles. Here’s the trailer: