Back in October 2011, we saw a preview of the arcade-puzzler Hank Hazard [99¢] from Red Rocket Games and Chillingo. Well, a few months have passed, but it’s finally out. And after punching, dropping, rolling and blowing up Hank the bucktooth hamster for a couple of hours, I realized I was enjoying myself.

Hank is a brave rodent, who dreams of being the worlds first “stunt-hamster". He’s sealed inside a transparent hamster-ball which must maneuver through each level, collecting three stars before crashing into the finish target. It’s part “physics game" and part “puzzler", as you need to determine a safe way through each level.

There’s no joystick, buttons or tilting as you don’t control Hank’s movements directly. Instead, you interact with the surrounding items to make him move. For instance, tapping certain platforms makes them disappear, so if Hank was sitting on that platform, he would fall and roll down a ramp. Or perhaps there’s a weight on the platform, which then falls on a see-saw and catapults the daredevil hamster upwards to an awaiting star. 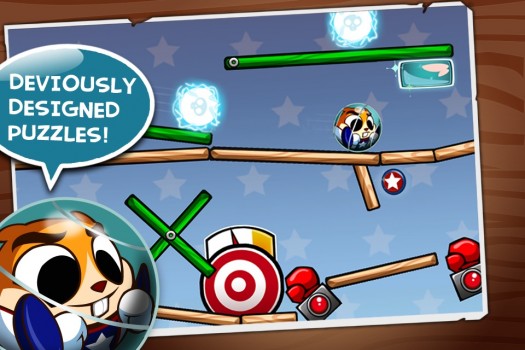 There’s spring-loaded boxing gloves, reversible escalators and “hamster-safe bombs", which are just a few of the ways to move the otherwise stationary hamster. But, avoid the fire-pits and electrical fields, or you’ll be one charred little critter.

The first chapter is named “The Early Years" but you can also unlock the “Bigger and Better" and “Fairly Badass" chapters by earning stars (making 75 levels in total). A further 18 bonus levels can be unlocked by reaching special golden stars or gifting the game. And there’s even a small mini-game hidden away in the credits page, which earns you one of the 23 achievements.

A three-star rating and score is awarded for each level, with high-scores stored via Game Center and Crystal. A separate leaderboard is provided for each chapter, plus an overall leaderboard for total score. To improve your scores, you can gain a “nuts" bonus by collecting all three stars while  also satisfying a specific objective for the level, such as:  “Finish the level traveling at greater than 32 mph", reach a certain height, finish within a certain time, or finish within a limited number of moves. This adds some extra challenge and replay-value.

The level designs are varied and interesting, and ramp up in difficulty as you’d expect with the last chapter requiring more thought than the fairly easy first levels. The difficulty increases because there’s more game elements placed on the screen to navigate through.

Whenever I start to tire of Chillingo’s constantly expanding range of casual physics-based games, they have a tendency to release another cute and enjoyable game. Somehow they always manage to lure another dollar from my wallet. But frankly, who can resist a few hours entertainment for a single dollar, when it features puzzles, a wide-eyed hamster, and bombs.