The just-released Paper Monsters [99¢], co-developed by Robots Vs Wizards and Crescent Moon Games, has been in the works for a long time. In fact, development originally began way back in mid-2010, and we didn’t learn until well into 2011 that Crescent Moon had actually jumped into the project to give it a graphical makeover (as they’ve been known to do from time to time).

With such a long development cycle, it’s easy for the hype over a game to do one of two things: either people start to lose interest as the months drag along, or the hype builds up to the kind of level that would be hard for any game to deliver on. Well, Paper Monsters finally has reached the App Store, so if you’re part of that first group then it’s time to start paying attention again.

More importantly, however, are the folks in that second group – the insanely hyped crew. Paper Monsters is an incredibly fun platformer, and it’s downright gorgeous to look at. Plus, it’s full of all kinds of whimsy and little touches that bring up those warm, fuzzy nostalgia feelings that will take you back to platformers of days gone by. But, if you’re looking for a genre-defining game that breaks all the boundaries that you thought you knew for platformers, well, Paper Monsters isn’t quite at that level. With tempered expectations, though, it’s one of the nicest platformers currently available on iOS. 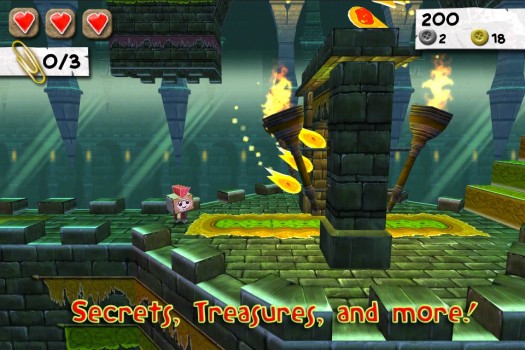 First off, Paper Monsters takes more than a few cues from the iconic Mario series. It doesn’t try to hide this fact, either. With every jump your character makes, he lets out an excited “whoo!” that you almost expect to be immediately followed by “here we gooooo!” or “it’s-a me, Mario!” The majority of enemies are dispatched by jumping on their head, you’ll hop into gigantic pipes to warp to different parts of the levels, and there’s even a giant mouth built into a mountain that you’ll escape through after beating up on a boss, à la Super Mario Bros. 2.

These things don’t detract from the game though, in fact, they add to the already rich character and personality of Paper Monsters. As I said previously, the game is gorgeous. Graphics are all done in colorful 3D, though gameplay is strictly old-school 2D style. The music is also a big part of the experience, and it manages to create incredibly moody atmospheres to explore and play through. The many Mario-like flourishes merely enhance the already fantastic presentation of Paper Monsters. 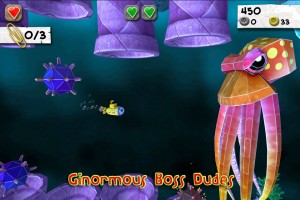 Gameplay itself is simple and straight forward. You can move left or right, jump, and double jump. And… that’s about it. Occasionally, a level will have you playing as a helicopter or submarine, effectively playing more like a shmup which breaks up all the platforming nicely. These sections are actually quite fun, and I wouldn’t have minded more of them. In fact, one of the big downfalls of Paper Monsters is that it’s a pretty short game.

You get 4 chapters in the game, each with 4 levels, for a total of 16 levels. The environments run the gamut of familiar themes like grass lands, ice levels, the desert, and jungle ruins. Each level is a fairly good length, with checkpoints in the middle so you don’t have to restart from the beginning should you die, but they really won’t take too long to complete anyway. Some replay value is added in the form of 3 golden paper clips and a single hidden tile that need to be collected in each level if you wish to fully beat it. You can also collect buttons, which are essentially the “coins” of the game, and which can be accumulated and spent in an in-game shop on additional clothing items to deck out your character. It’s a fun distraction, but pretty non-essential. Also, if you don’t have much patience, you can get more buttons as IAP if you wish.

Finally, a really cool inclusion in Paper Monsters is the Dash Mode. This is essentially an auto-running version of the game, where your character runs to the right on his own and you just need to worry about jumping on enemies and over hazards while collecting buttons. It’s really quite fun, and could easily have been a full game on its own, so the fact that it’s included as a bonus is pretty nice. You can also try this mode in your web browser for free, if you’re curious.

But where Paper Monsters really wins is in its presentation and overall “feel”, which is something that’s hard to describe. I’ve played a TON of platformers in my day, and while some of them appear to have all the right components, sometimes the most basic mechanics of running and jumping just don’t feel right, and it pretty much ruins the rest of the experience. Paper Monsters pulls this aspect off well, as just playing through the levels is fun in and of itself, even if it doesn’t wow you with a ton of new ideas or endless amounts of levels. For lack of a better expression, it just feels right.

It seems the developers set out to make a throwback to some of their favorite old-school platformers, with awesome graphics and solid controls, and at this they completely succeed with Paper Monsters. If you don’t go in expecting the game to reinvent the wheel, and can appreciate the eye candy and simple fun of platforming, then Paper Monsters should give you plenty of enjoyment for your dollar. People in our forums sure seem to dig it, and with some additional levels planned for updates, there should be even more fun coming in the future.