Are your time-management titles missing the hands-on charm of cooking sims, and your cooking sims missing too much restaurant management? If so, you’ll want to take a look at Order Up!! To Go [Free]. A combination between a time-management restaurant game and a touch-screen heavy cooking sim, Order Up is filled with great stuff: charming characters, varied locations, fun recipes and surprisingly decent voice acting, for starters.

Order Up!! was first released for Wii in 2008, and is due to come out soon for PS3 and 3DS at full retail price. I haven’t played the console version of the game, but it sounds as though To Go is essentially the same game. For the mobile outing, Supervillian Studios has added advertisements, removable with IAP, and taken away certain goals to encourage players to purchase currency. Aside from that, it looks like everything else is intact. Intact, and downright entertaining.

Just one catch: you’ve gotta like grinding. Every day you buy meals in preparation for your customers, and those you sell give you a small profit. That profit goes toward buying spices and special meals, cleaning your restaurants, unlocking new recipes and working your way into new locations. Eking out a living this way takes time, and nicer restaurants are pricey. Originally this was handled by letting players unlock new restaurants once they met certain goals. In this freemium version, you have to earn the cash – or buy it. 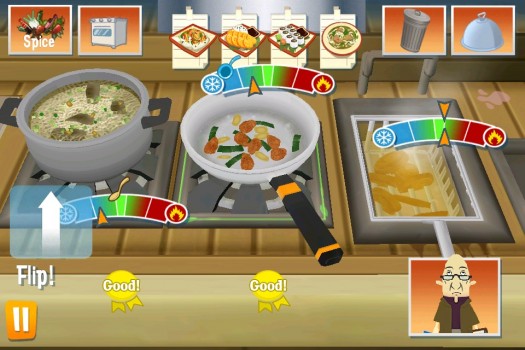 If you’re down with grinding, though, Order Up is great. It looks like Cooking Mama at a glance, and I’d be lying if I said there weren’t similarities. But Order Up goes deep, ending up with as much focus on the management elements than the chopping and stirring.

At the highest level, you’re responsible for caring for your restaurants. As I mentioned, this means, amongst other things, earning enough money to open them up and keep them running. Each day you pick out the menu based on a randomly selected special, a descending list of popularity and a daily customer total. Say you expect 14 customers in a day. 6 might order the special, 5 the most popular item, and 3 the second most popular. Or maybe 12 will order the special. You don’t have those numbers, so you have to balance buying enough stock to cover all your customers’ potential desires with your rather slim profit margin. 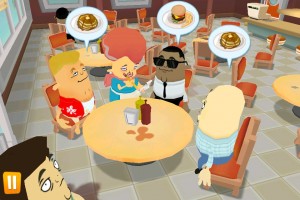 One you open up for the day the customers start to stream in. You send out your server to take their orders one table at a time, and she or he brings them back to you to cook up. Take too long and customers will start getting unhappy, which will cut into your profits. You’re given up to a handful of orders to handle at once, and you have to time your preparations to keep anything from getting cold, doing as much as you can at once to keep things moving but holding back some steps to send your orders back out piping hot.

Preparing food is very hands-on. To make a burger and fries, for example, you have to drop meat onto the grill, then gesture to flip it when it’s at the perfect temperature. You drag fries down into the oil and then up when they’re cooked. You pull the leaves off a head of lettuce by swiping, and chop a tomato by tapping at the moment its guidelines meet. As each part is finished you tap it onto the tray, and once everything is ready you hit a bell to send it off to the table. Each meal is ranked by how well you complete each of its steps, and your profits depend on that rank. 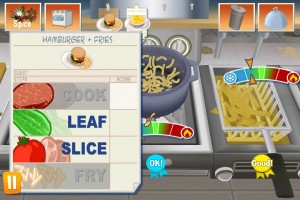 The game’s setting, Port Abello, has six restaurants currently, each with its own unique theme and a slew of recipes. You work your way through a greasy spoon to a Mexican joint, up to a slightly swankier Italian place, through Asian fusion and finally into fine dining. Each setting has thematic decor, recipes and servers, and each of those servers has several lines of dialog with which to compliment your work and butter up your customers.

Port Abello also has a few characters of its own that show up at your restaurants as special guests. They too have voiced dialog to express their spiciest seasoning desires. If you’ve purchased the right spices and figure out their hints in time to add the right one to their dish you’ll earn a hefty bonus, something every struggling restauranteur can appreciate.

Assuming you manage to keep on top of everything else, you can put your coins toward upgrading your kitchens. There are currently a few options available for faster food prep, but it looks like assistants and mini-games are en route as well. You’ll also want to keep your kitchens clean with regular payments to the cleaners. If you don’t, you’ll end up dealing with tedious mini-games like flicking away rat infestations or showing the health inspector that you can, in fact, wash lots of plates.

Other than its sheer grindiness, the only real problem with Order Up is that you’re going to be doing a heck of a lot of gesturing. Each recipe you pick up increases your daily customers, increasing the length and complexity of your day. By the time you’ve grilled your thousandth burger it starts to lose its charm, and days dragging on longer and longer doesn’t help. But that’s just a sign that it’s time to take a break. Give your wrist a rest, have some real food and come back refreshed and ready for another day at the grill. It’s hard to fault a game for having too much to do.

Really, it’s hard to fault Order Up!! To Go for much at all. It’s virtually free, though it would probably be hard to live with the ads for long. It’s filled to the brim with a variety of tasks and locales. If not for the damage done to the game’s pace by its freemium elements it would be a nearly flawless casual restaurant management title. It’s a shame that the best way to monetize the game was to make it frustratingly slow, because that will undoubtedly turn away many potential players. Don’t make their mistake. Slow and steady wins the restaurant race, so take it easy and cook up something nice.