JRPGs are a tough sell these days on iOS. Typically ports making their way from other systems, most seem characterized by substandard touch control integration and shoddy English translations. Fantasy Chronicle [$2.99] thankfully only suffers significantly from one of those two issues. While the translation is certainly lacking, the core gameplay and controls make this RPG an enjoyable experience, assuming you’re into a lot of grinding.

Fantasy Chronicle follows the story of Light, a mysterious youth adopted by a small village who begins his training to join Holos Over, the hero guild charged with ridding the world of evil. During his adventure, Light encounters strife, grief, revenge and nearly every other RPG cliché under the sun. While the story isn’t going to win any awards, it does just enough to advance the narrative and keep you playing, which is more than I can say for some of the other games in the genre. 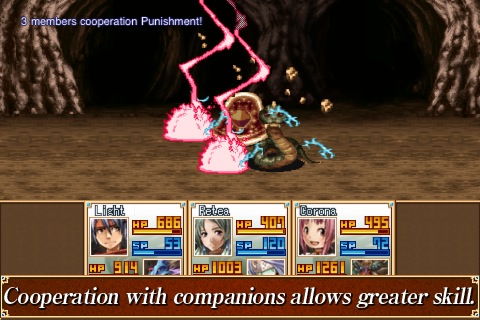 One area that Fantasy Chronicle does a great job with is its battle system depth. Players control a maximum of three main characters at any time, and each of those characters can employ the aid of a guardian beast – monsters that have their own stats and special moves and can share the damage incurred by the character they are attached to. In addition, you can also set various tactics for your guardian beasts which impact the amount of damage they share with their companion.

I also enjoyed the material/crafting system that Fantasy Chronicle employs. Every enemy you defeat has a chance to drop some kind of raw material that you can later use to create or upgrade your weapons and armor. Upgrade your equipment enough and you have an opportunity to convert it into a different item entirely (assuming you find the crafting book for the new item). Soon after the intro, you also meet an NPC that’ll automatically find certain material for you depending on what locations you tell him to search. It’s a neat little addition that lets you supplement your materials to make the crafting experience a little less monotonous. 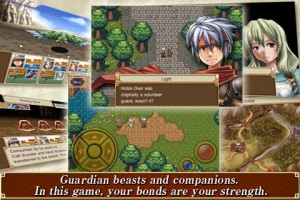 Control-wise, while I don’t think Fantasy Chronicle does a particularly good job with its touch controls, the virtual D-Pad controls are very responsive. I particularly liked the optional control toggle that lets you quickly switch between touch and D-Pad controls whenever you wish (this is particularly useful because the D-Pad is huge and blocks a lot of screen space). It’s a feature I think more games could use.

Like many other JRPGs on iOS, Fantasy Chronicle suffers from a mismanaged English translation. Casual conversations between characters feel disjointed, and there’s a lot of story (and non-story) related dialogs that are borderline incomprehensible. It’s never a good sign when I get to a story section and I find myself trying to speed through simply because I don’t really care too much. Granted, I’ve seen plenty of games with a more horrid translation than Fantasy Chronicle, but considering its RPG roots I’m always a bit more critical of an element I consider essential.

The biggest issue I think Fantasy Chronicle contends with is eventual tedium. Each region that you explore has a town acting as the central hub with quests, with a few surrounding areas inhabited by baddies. Typically, you’ll enter the town, get a few quests with mundane objectives usually involving kill nearby enemies, and then you return for more quests. Do enough and you’ll unlock a story-based quest that expands on the narrative. Eventually, you’ll get to progress to a new region with the quest hub and you get to do it all over again.

Because of this type of mission structure, Fantasy Chronicle tends to feature a great deal of grinding with not a lot of story reward. You’re going to grind for mission objectives, resources for crafting, and for experience (although the last one not so much). Missions typically take you back to the same areas again, and when you’ve found yourself over leveled for those areas, the experience becomes an exercise in how fast you can push the attack button during battles.

There are undoubtedly some JRPG fans out there that embrace this style of play. Considering that Fantasy Chronicle gets a lot of the underlying gameplay and controls right, I’d actually recommend it to those types of gamers as a title worth checking out. However, if you’re looking for something a bit less formulaic or a game with more emphasis on story quality, Fantasy Chronicle may not be the RPG you’re looking for.