We previously covered smuttlewerk interactive when we took a look at Companions [$4.99/Lite], a well-done top-down role playing/strategy title. Now the developers are back with Time of Heroes [$0.99], another great addition to the genre. Ditching the top-down sprite visuals for a 3D-look, Time of Heroes still maintains smulttlewerk’s reputation for gameplay depth while successfully transitioning to a classic turn-based strategy game.

If you’ve ever played the likes of Final Fantasy Tactics, you’ll feel right at home with Time of Heroes. The game takes place on a series of maps, with players choosing heroes, units and their placements at the beginning of the battle. The game then plays out via turn-based gameplay with the goal being to accomplish all the objectives of the map (typically kill the opposing heroes while keeping your own alive). Time of Heroes is classic turn-based strategy, and I think it gets a lot of things right.

By far, the most successful element that Time of Heroes captures is its very deep gameplay. In addition to the standard rock-paper-scissors type of unit matchup advantages, Time of Heroes also features terrain bonuses (and weaknesses) and aura influence (bestowed by being close to a hero). Considering all these bonuses apply to both your units as well as the enemy, these all lead to every move potentially being very important in the great scheme of winning each battle. 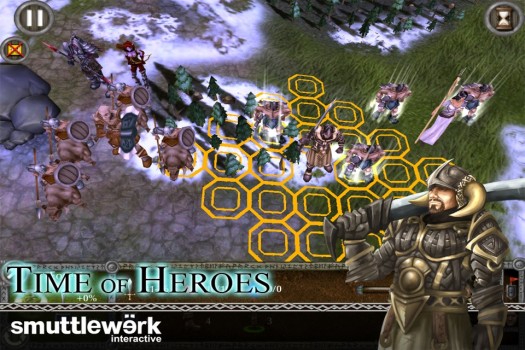 While I absolutely loved the depth, I can imagine that the large amount of variables might seem overwhelming for the novice tactician. This is especially true since the game loves to throw out scripted mini-cutscenes during battles that end up with even more baddies joining the scene. Some of the maps can become downright disheartening when you’ve used up the brunt of your forces, think you’re on your way to killing the final monsters, and then more show up. Thankfully, Time of Heroes also includes a good difficulty system, ensuring that most folks should be able to tailor the game to their own skill.

In addition, Time of Heroes does a great job making your actual heroes stand out stat-wise. Most missions will force you to keep them alive via objectives, but your characters also have a very robust experience system with a large amount of talents that can be picked up via the collection of skill points (which you earn by leveling up). When you add in the fact that each hero can equip various items that can either boost their stats or the stats of the units they command, you’ll find that there’s a lot of choices in how you choose to win each battle. Even the spell system deserves some praise, as most spells offer area of effect bonuses that can be the difference between victory and defeat (your enemies have access to these spells too, so watch your positioning). 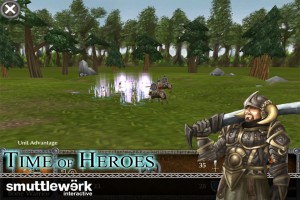 Another aspect of Time of Heroes that deserves kudos is its use of IAP. Yes, the game does feature an in-game shop that lets you spend real money, but they are all for items that only offer a small advantage in battle. Furthermore, these items are really only useful in the hands of folks that already possess some modicum of strategy, making them simply supplemental additions rather than ‘Win Game’ super items. Some may argue that IAP should in fact be limited to items that make the game very easy, but I appreciate the fact that Time Of Heroes tried to balance incorporating the option to provide some advantages via IAP while preserving the integrity of the game as a whole.

One thing you’ll notice about Time of Heroes is its pacing. It’s pretty slow, especially at the default settings with full movement and battles on. The game features extended battle scenes that do a decent job showing the various advantages of opposing units, but it can add a decent amount of time to each turn. Granted, the developers have put in plenty of options to skip most of the battle and movement animations, making the game much faster (I highly recommend using them). Despite this, even with the quick options turned on, the game can still be a little slow. However, in all reality this is a minor issue since I’m assuming that anyone that’s a fan of these types of deep strategy games should have more patience than the average gamer.

There are also some UI issues that I’d like addressed. For example, the way in which a unit’s movement becomes permanent as soon as you select another character is confusing at first, and seems counter-intuitive. Even though it would add another step, I thought a ‘Wait’ button would have made more sense. I understand it was done for the purposes of streamlining, but it still feels odd to me. Also, due to the “3D" view of the battle field, it can occasionally be difficult to tap exactly where you want your character to move (especially if the place you want to go is surrounded by units to begin with). Thankfully, a quick undo button is always there in case you have to try again (just don’t tap another unit beforehand).

Finally, I also would have liked more of an interactive tutorial. While the game does a good job getting you going with the basics, an advanced tutorial giving more in-depth lessons on terrain and unit advantages would have been a lot better for me instead of simply telling me to go to those screens and attempt to decipher the large block of percentages. It’s always tough balancing heavy gameplay depth with approachability, and while I think Time of Heroes mostly succeeds, this is one aspect that I think they could have improved upon.

While the concerns mentioned above somewhat detract from the overall experience, Time of Heroes nails the most important elements of a good strategy game. When you combine the large amount of depth on the gameplay side with a good narrative tale and a fairly decent control scheme, Time of Heroes is well worth a recommendation for any fan of strategic turn-based games.