Our collective gut says that we’ll be talking a lot about Colaboratory‘s Puzzlejuice [$.99] in 2012. That’s big praise considering it’s January and all, but it has that indescribable feel of a remarkable game. To its credit, it does a great job convincing you that it is, in fact, this good; it has an unparalleled swagger, presence, and charisma that crops up in almost every aspect of the title, including the UI and tutorials. It knows it’s hot.

We’re not sure if it knows how crazy it is, though. Puzzlejuice deftly pairs the block matching of a Tetris to a free-form spelling mechanic like the one used in last year’s stand-out, SpellTower [$1.99]. Basically, you create lines by rotating blocks of varying shapes and smashing them together at the bottom of the screen. Once you make a solid line, the matched blocks magically transform into letters that you then have to spell words with. 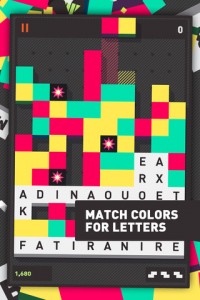 When you spell a word, the blocks disappear and allow for more matching action. This is especially vital since blocks are constantly tumbling from the top of the screen Tetris-style and threatening to end your session if they breach the top of the level. The push and pull of the action is beyond frantic, as you’ll need to keep your eye on everything at once. Puzzlejuice also tosses in challenges, like, say, “spell a five-letter word," to the mix, which pushes your dexterity and mental fortitude to its limits.

There’s a lot of smaller mechanical treats within in the package, too: it has power-ups like bombs and total game freezes; it has color-specific hooks in the blocks that allow you to pop matching colors before side-to-side lines are formed; and it has two kinds of “core" scoring modes, one in which asks you to spell at least five-letter words for the maximum amount of block clearing.

Puzzlejuice keeps you on your heels and fighting against a whirlwind of blocks, colors, letters, and challenges. The franticness of the play is a nice change of general genre pacing, which is a big reason why we’re so behind the game. It’s also a looker, too. Check it out:

If you hate word games with a capital H, we can’t imagine that this will be an exception to your overall distaste. If you do enjoy these kinds of titles, Puzzlejuice is probably something you should check out. We’ll be giving this the official go for review shortly, but obviously our impression so far is, er… pretty good.