You might not have downloaded it yet, but you’ve played Z-Day [$1.99] before. It’s the game you play in your head while reading The Walking Dead; you know, that game where you plot out where you would go and how you would operate during the zombie apocalypse? That one.

Would you take in that stranger you found on the road? Would you mug him instead? Would you break into a police station surrounded by zombies? With moans at your back, three kills to your name and a sledgehammer at your side, would you stop to take a bag of tools from a broken-down car in the middle of the road? 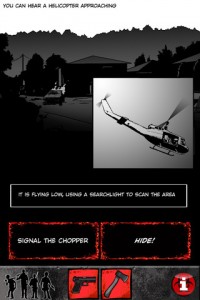 These are the questions Z-Day asks, and presumably, ones you’ve considered before if a z-day daydream ever popped into your mind. Z-Day is a graphic novel spin on the Choose Your Own Adventure, text-based game, except its presented on iPhone and iPad in all of its gory, high-resolution art glory.

Playing is simple, and the moment-to-moment content is strangely intense. You start in your house. A zombie apocalypse has begun. You decide if you want to run or grab a new weapon. Then, you decide, while zombies are coming to the door, if you want to dig for supplies like duct tape, fight the zombies, or get to higher ground.

All along the way, Z-Day gives you plenty of entertaining situational content. At one point, you’ll be asked if saving your best friend is worth a zombie attack. Later, you might bump into a roving band of gun-toting jerks robbing a pawn shop. Before that, you might meet your unfortunate end in the bowels of a police station, as a horde steadily infests it as you search for fat loot. 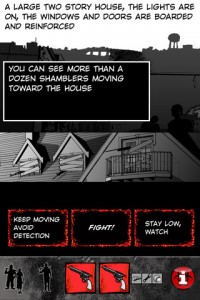 The most interesting thing about Z-Day is that it doesn’t pull punches; if you make a bad decision, you’ll probably die. Also, it puts you in horrible situations and then has you make uncomfortable decisions. As you play, you might notice things like empathy have vacated your brain in the face of so many horrifying scenarios.

Breaking this down mechanically feels like a disservice to the experience. In Z-Day, you’ll be presented with a variety of Choose Your Action text boxes, hand-drawn graphic novel scenes, and a description of situations. Pick an action, and then move on to the next moment. The goal is survival, but even if you die, you’ll be scored on a variety of elements, including your decision-making or the quality of your weaponry and items and the amount of survivors you brought along the way.

Z-Day doesn’t have unique content, so you’ll see the same situations over and over again as you restart. It’s really up to you to role-play it and see different outcomes. There are quite a few, too, in each given situation.

I’ve been having a blast with this since it’s essentially gameifies what runs through my head whenever I read or watch a piece of zombie content, but it’s also solid production-wise. I heartily recommend this to anyone that still has an itch for zombies, or even an appreciation of primarily text-based titles.