If the golden days of Lucasarts adventure titles such as Maniac Mansion, Day of the Tentacle and Zak McKracken and the Alien Mindbenders recall fond memories, there’s a good chance you’re destined to love any and everything about Kaptain Brawe: A Brawe New World [Free / HD]. After all, who didn’t get a perverse joy out of wandering aimlessly and trying to figure out puzzles that were so odd that using basic logic on them meant you would never advance?

Those types of puzzles make their appearances here, but so does a lot of solid gameplay. Kaptain Brawe opens up with an intro to the title character, a big goofy dude who somehow managed to get hired as a space officer despite the fact he’s clearly not the brightest bulb in the room. Already, we have a recipe for some laughs — that’s what adventure game fans are used to. You’ll start out solo, but eventually meet new characters like Row Boat (a robot of few words) and Luna (a bit of a mystery all around) who you can swap between at different points in the game, offering a bit of new perspective. 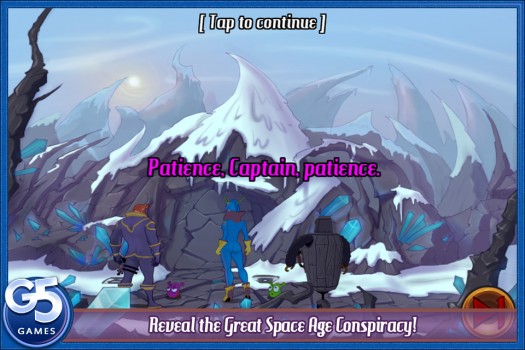 What starts out as a basic exploration of a ship on a deserted island segways into Brawe stumbling headfirst into a complex conspiracy that will send him across the galaxy searching for answers. It’s a proper adventure game story, and it never failed to entertain. The humor of the game is pretty spot-on, although I felt it fell a little short from time to time (but in that cheesy way that all adventure games seem to touch on at one time or another.)

Speaking of genre tropes, one thing that Kaptain Brawe also has nailed when it comes to adventure game homage is the difficulty level of the puzzle solving. While there are options here (Casual and Hardcore), some of the solutions to puzzles are so downright ridiculous that it reminded me of playing Myst back in the day. A hint system proves helpful if you get really stuck (Lord knows we never had THOSE back in the day), but there are times when it won’t reveal missing something very small and you will just kind of be sitting there without a clue on how to proceed. In other words, get ready touse your noggin in the most creative of ways.

The interface and controls are pretty basic — an icon rests in each corner of the screen, and all movement is produced by the touch of a fingertip. It makes the game easy to get lost in, but the visuals also take a hand in that, and they do a grand job. The game has a sweeping cartoon feel, but the style is very distinct and memorable. 2D backgrounds and 3D characters work together nicely, and there’s a lot of locations to explore, all of them rendered in loving detail. I personally loved the world of Kaptain Brawe, as it offered a tone and setting that you can mostly only find in Telltale Games titles these days.

While Kaptain Brawe may not be the perfect intro to the genre due to its difficulty levels, it does offer an excellent story and clever writing that ought to draw longtime fans of adventure games into its clutches quickly. There’s no denying the retro appeal, but overall this is a solid title even by today’s standards. If you like the taste offered by the initial free download, you can unlock the full game via IAP, which will set you back $4.99 on iPhone and $6.99 on iPad. If you ever passed time on a game like Leisure Suit Larry or Space Quest, you will adore Kaptain Brawe and all of his fumbling attempts at saving the galaxy.