Bejeweled [$.99], the new stand-alone version of Bejeweled proper on the App Store, is as good as you’d expect. After all, it’s Bejeweled — the same insanely colorful, sometimes hypnotizing, and always creatively gifted match-three that has ignited the creation of a legion of pretender titles over the years. This Bejeweled in particular doesn’t do anything that will blow your mind. For the most part, it’s simply the core experience translated well to iPhone and iPod Touch. Not that I’m complaining about that aspect.

The thing that always gets me about Bejeweled is how mesmerizing the puzzle mechanic is, and the artful things the game’s creators do to bolster this effect. This version’s new Classic mode kinda encapsulates what I’m saying here: at the top, it’s a gauntlet style mode that has you matching until no other moves remain, but the matching itself so darn hypnotic, you do everything in your power to ensure that you keep the game moving. But then the mode also zips you between new backgrounds and shows off some pyrotechnic match bonuses that radically change up the play.

For example, matching more than three of a gem can net you a sizzling gem that ignites gems in its area or an electrical gem that zaps entire columns of gems. You move with flow without really thinking about these, but they change the pace and the progression of an entire puzzle in satisfying ways. Getting these bonuses is almost a meta-game, as you subconsciously realize that they’re so integral to keeping Classic moving. 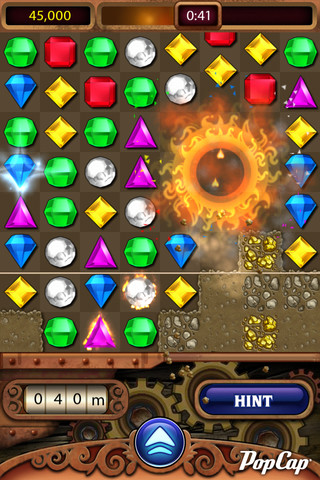 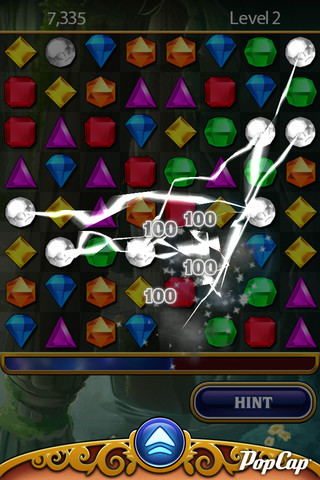 Bejeweled also has a mode called Diamond Mine which pairs the core play with a funky digging mechanic. Underneath the board is dirt. Matching above the dirt clears some of it. Some spots have special bonuses, but a timer keeps you from scheming too heavily.

Again, this is one of those neat twists on the formula. You have to play fast and loose, but also with a specific goal outside of straight-up matching. The explosive bonuses are just as integral here, as they’ll rid the board temporarily of massive chunks of dirt. I like this one in particular: the points you’ll earn are ridiculously high, which gives a certain sense of momentum to Diamond Mine that Classic doesn’t have, and the timer is a devilish addition that keeps the pressure satisfyingly amped up.

Zen Mode, on the hand … it’s the oddest of the trio of modes in this version. It takes the formula, spits it out into a regular match, and then tells you to play at your leisure. It also sports a variety of “zen" options, such as ambient effects like crickets and lets you even pick various mantras to display on the screen. 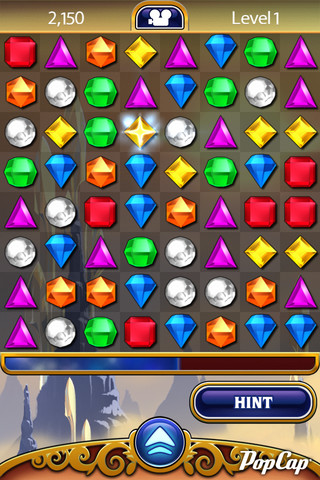 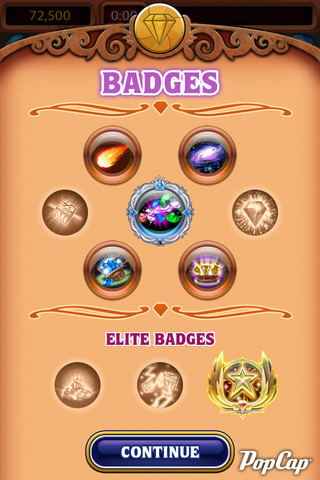 It comes off as silly, and, well, it is. I don’t get it and probably never will. I just don’t see how it could possibly achieve the goal of making you feel like you’re sitting in a meditation room blazed out of your mind. This is Bejeweled, you know?

And while we’re exploring negatives, it’s notable that Bejeweled does not ship with Game Center support — the game’s leaderboards are filled with fake entries and you’ll never see what your friends have scored. It’s a weird, bad decision not to include this.

Zen and the lack of Game Center work against the game as a whole, but taking it all in, they’re forgivable issues. Bejeweled is Bejeweled, and that means it’s a great match-three puzzle game that goes above and beyond what other match-threes do. The play is as mesmerizing as ever and the game’s two other modes really support it and add to it in meaningful ways. If you’re into the franchise or not, give this a look.