Stories are hard to come by on the App Store. Most games don’t bother with even a pretense of a story, and those that do tend to be crammed in rather painfully. It’s understandable — most iOS games are created by tiny teams, often just a programmer and an artist, so there’s not much room or budget for writing.

Sometimes, though, a game comes by that shows that you don’t need to sacrifice to tell a good tale. Some stories are as simple and eternal as boy meets girl, and they can be told over and over in brand new ways. These Robotic Hearts of Mine [$1.99] is one of those games. It’s small, simple and charming, and it does an admirable job of bringing narrative to that least-storied of genres, the puzzle game.

Better still, the puzzles in These Robotic Hearts of Mine are successful and interesting. Games that really experiment with narrative sometimes tend to end up a little light on enjoyable gameplay, but this game does not. It plays out over 36 levels of Rubik’s Cube-inspired puzzling that boast a reasonable difficulty curve, entertainment and even a smidgen of replayability. 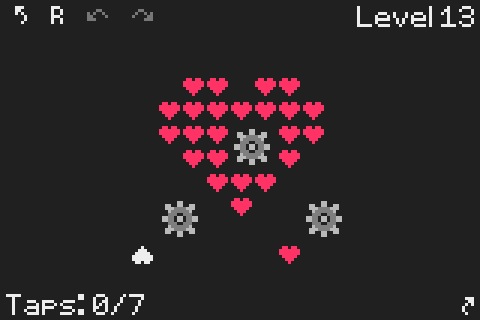 The puzzles are straightforward. Each level has a field of hearts and gears. You can turn the gears by tapping them, and they take adjacent hearts with them when they rotate. The goal is to rotate the hearts until all are right-side-up, sometimes moving them from one gear to another in the process.

Each level gives you a minimum number of taps to try to achieve, but you can keep going as long as you’d like without penalty. There are the usual controls — buttons to take you back or forward a move, buttons to reset the level, and so on. You’ll never find yourself frustrated by an inability to proceed.

After each level is completed, you’re shown your progress compared to that of others, whether you hit the par score or fell within the average or worse. Then you’re treated to a single screen of narrative, one sentence of the story.

To avoid spoilers, I won’t get into the story. It’s so short and sweet that there isn’t much to be said that won’t give it all away. Suffice it to say that it’s emotionally charged, if not especially original, and that it’s quite successful.

As to how it merges with the gameplay, my feelings are mixed. I like the slow reveal of the story, the way you need to work through each level. As the levels get longer and more difficult, the story feels similarly halting. Needing to work for it feels quite appropriate. But some mechanical choices get in the way. For one, that score page you’re presented with on ending each level if quite an intrusion into the game’s atmosphere. It’s a distraction to start thinking numbers and strategies when the story is presented so briefly.

A more serious problem presents itself: you can freely skip your way through the entire game if you want to, reading the story panels and then skipping the level. It’s hard to take the combination of the two seriously when they can be ripped apart like that. If the goal is that people will play for their narrative, letting them skip the game undermines the experience, and frankly the story isn’t quite enough on its own.

In the end, These Robot Hearts of Mine is good, but it isn’t great. As a game, it doesn’t go quite far enough to reward players for pushing through or to encourage them to play well. As a narrative, too many of the game elements get in the way of the presentation. A bit more commitment could strengthen the game, hopefully in the direction of its narrative. There are plenty of great puzzle games out there, but never enough strong stories.

Still, it’s a lovely game, and for the most part it works quite well. I consider my time with it well spent, even if a few tweaks could have made These Robotic Hearts of Mine much more atmospheric. Give it a look for yourself, and let us know what you think in the discussion thread.