Saving Yello [99¢] from Tactile Entertainment and published by Dreamfab is a new physics-based puzzler about a pet goldfish named ‘Yello’.  Poor Yello has been plucked from his bowl and dumped on the floor by his young 7-year old owner who doesn’t appreciate that fish are actually water-based creatures. Yello needs your help to return to his fishbowl, within a limited number of turns, but along the way he wants to destroy some of his owners toys as revenge. Since its release, this quality game has immediately shot into the top-40 on the US App Store.

You can fling Yello across the level, back towards his bowl, by stretching his tail to determine the trajectory and power, then releasing.  If you pull his tail back far enough, his little tongue pokes out, he gasps and his eyes go bloodshot from being stretched. Assuming you aim successfully, Yello eventually plops back into his glass bowl and swims around happily (and you score a star and the next level is unlocked).  If you don’t reach the bowl within the allocated turns, or send  Yello into an out-of-bounds area, the level is over and the poor fish starts crying. 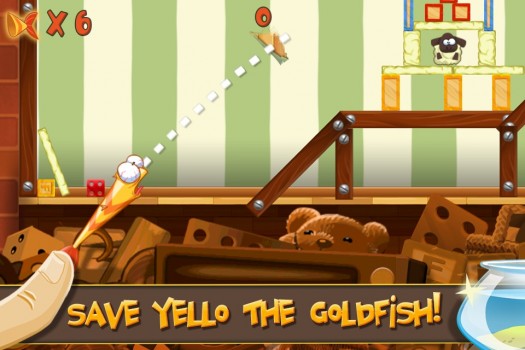 But, getting Yello back in the bowl is only part of the challenge. If you want to earn the other two stars for the level, you’ll need to destroy his owner’s toys by crashing into them, to achieve the displayed score thresholds. If you destroy three-of-a-kind items, such as three teddy bears or cars, you’ll receive bonus points for a “toy-combo". Destroying five items in one turn increases the score multiplier. Once you score enough points to earn three stars – and importantly, still reach the fish-bowl – Yello celebrates by jumping up and down in his bowl, happily saying “Wheeeee!"

Saving Yello is definitely going for the “cute fish" factor, giving Yello a variety of animated expressions.  If you throw him directly at a wall, just before impact he says “uh-oh!" in a cute little voice. And people lap that stuff up, just like the happily soaring bird in Tiny Wings [99¢]. But, just because he’s cute doesn’t stop this game from roughing him up. The unlucky fish is dropped on the floor, set on fire, encased in ice, exploded by dynamite, impaled with pins and blasted by bombs. Metal objects land on him with a heavy CLANG! And some levels feature: fish hooks! 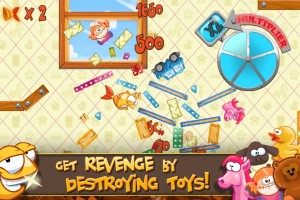 This may sound like fish torture, but these items actually help Yello.  He can burn wooden obstacles when he’s on fire or freeze and shatter metallic barriers whilst frozen. He can grab dynamite in his mouth as he flies through the air, which explodes when he lands (charring his face black). The fire, ice and explosions can all trigger chain reactions, toppling or destroying entire structures for increased points.

Being impaled with pins helps him stick to walls, and when obstacles fall on his head you can tap to clear them away for extra points. And Yello is such a hard-core fish that he jumps onto fish-hooks and uses them to swing to higher platforms.  Can you beat that, Nemo!?

There’s currently 40 levels provided within three settings (Play room, living room and kitchen), with more levels promised soon. Each setting is unlocked by gaining enough stars from prior levels. In-App Purchases are available to unlock all levels but this is not necessary. There’s supposed to be leaderboards for each setting and overall, plus achievements in Game Center / OpenFeint, but Game Center  wasn’t working in the initial release. Strangely, there’s also more achievements listed in OpenFeint than in Game Center.  The developers advise a fix has been submitted to Apple.

One weakness of the game is the dynamic camera work, which automatically frames the camera around the fishes position. The game lets you pan or zoom-out to see the whole level, which is great, but after a second, the camera disregards the users preference and automatically re-centers back on the fish. This forces you to aim blindly or from memory of what’s off-screen. More of the level is shown when you pull Yello’s tail, however the ability to see the whole level while playing  (and a more accessible restart button) would really enhance the gameplay.

Saving Yello successfully wraps quality graphics and sound, interesting gameplay, varied power-ups, decent game physics and a cute fish into this entertaining fish-flinging game. This can be played casually, simply reaching the fish-bowl to open the next level, or you can 3-star the levels for more of a challenge. What’s next? Well, having survived three rooms in the house, the developers are still deciding which hazardous settings to drop Yello in next. That fish needs a new owner!