Com2uS and I have a love-hate thing going on. I love many of their games but I absolutely loath their aggressive marketing tactics. Nothing in the world is going to convince me to give you an unwarranted 5-star review. No, not even a small pile of virtual currency. As you might have already guessed, Homerun Battle 2 [$4.99] is the latest in the long line of Com2uS games that I despise myself for enjoying.

Distilled into its most basic form, Homerun Battle 2, much like its predecessor, is a batting simulation. A ‘casual’ sports game, if you will. The goal here is to hit as many home runs as is humanly possible. Sometimes. Depending on which game mode you’ve selected, you might occasionally be called upon to hit a number of fouls in rapid succession instead. It varies. If you’re experiencing vague feelings of deja vu, I don’t blame you. Com2uS is clearly a firm believer in the old adage, ‘If it isn’t broke, don’t fix it’ and that isn’t necessarily a bad thing. Instead of venturing away from a beloved formula, they’ve added more to the fix. But, we’re getting ahead of ourselves. 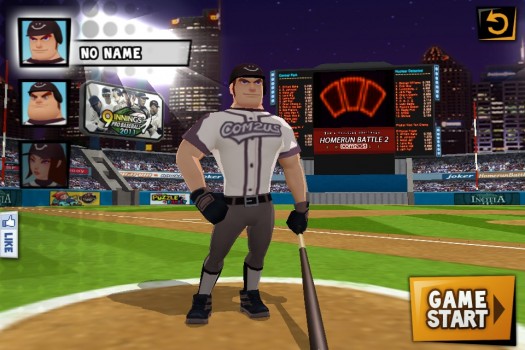 To recap for those who have yet to play the original, Homerun Battle 2 boasts of tight, simplistic controls. Aiming is conducted with the phone’s accelerometer while the actual swing is executed with a mere tap of the finger. As is the case with real life sports, timing and accuracy are essential to success here.

Simple as the core mechanics might sound, they’re also one of the reasons as to why Homerun Battle 2 is such a bloody entertaining experience. While it doesn’t require extensive amounts of thought, it demands just enough skill to keep you interested. On top of that, it’s also easy to get lulled into the rhythm of the game, to become caught up in developing the longest chain of home runs possible, to score pole hits – it’s like meditation, except with caps and large virtual sticks.

Nonetheless, that pales in comparison to the multiplayer segment of Homerun Battle 2. While there are several different modes to play, I’m personally infatuated with the mission mode. Essentially, it’s four people from across the world striving to be the first to meet the goal (hit four fouls in a row, be the first to reach 2000 points and so on) in each mission. There are no penalties associated to coming in second (or even last), just fewer rewards. While each fast-paced mission seldom lasts longer than a minute, you’re probably going to find yourself losing a good chunk of time to the system. Fair warning, though, much like in the first game, winning seems impossible without a suitable arsenal of equipment, a fact that may rub certain players the wrong way.

Like the original, Homerun Battle 2 has a customization system for you to play with. It’s a little more comprehensive compared to what is found in its predecessor; you’ll finally get the opportunity to play a wasp-waisted babe in this one. Unfortunately, the prices in the in-game store are tantamount to highway robbery. I mean, you could theoretically spend the next week farming golden balls but it feels ridiculous to demand five thousand of those for a new hat. I understand that Com2uS is trying to turn a profit here but this borders on extortion. What if I don’t want to buy your virtual currency? What then? I’ll spend my hard-earned money on frivolous virtual items when I feel like it, thank you very much!

I can’t help it. I’m a little bitter. I don’t like the idea of a game trying to bribe me. I also don’t like the idea of it attempting to strong arm me into an undesired purchase either. Homerun Battle 2 has all the elements that made the original such a hit and more. It’s fun, it’s easy to learn and it’d keep you occupied for a considerable amount of time. Unfortunately, it also exemplifies everything that I dislike about this type of pay model. Get this one if you’re hankering for more of the same, or if you’re looking for a polished take on the whole ‘casual sports’ thing. Just don’t come with the need to be number one unless you’re ready to pay for it.