I’ve seen a few strange hybrids in my day. Many of them have been described in sentences that end with “… meets Angry Birds," but I’m not complaining. Some of the most interesting games on the App Store have taken unusual inspirations and combined them. Still, I’m not sure what inspired developer Phil Hassey to create a version of Galcon [$1.99 / Lite], his 2008 galactic strategy game, that replaces the planets and ships with chickens and nests. A joke that went a bit too far, maybe?

But while Chickon [Free] may have started as a joke, it has ended up as an interesting alternative to Galcon. It isn’t a game for big Galcon fans — you’ll probably find it far too simple if you’ve already spent time with its older sibling — but for folks who like freemium games, barnyard animals and a bit of light strategy, it’s not a bad choice.

Here’s the premise: Chickontopia has been taken over by robot chickens. They’ve captured all the roosters and locked them away, and they’ve built factories to replicate themselves. You, a humble chicken, are the only one that can stop them. 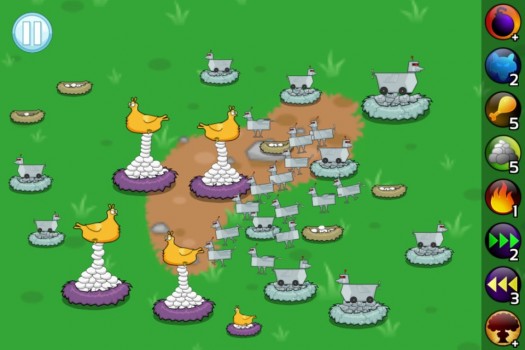 It’s a stretch, but it’s also a start. Where Galcon has you skip from map to map taking over a corner of the galaxy at a time, Chickon places its battles in an overarching strategy game. To free a section of the world you need to destroy its factory. To do that, you need four roosters to help you. You rescue them by attacking their cages while carrying at least 5 chicken feed. You earn chicken feed by battling robot chickens on a Galcon-esque map.

So you grind your way to success, defeating nest after nest. Battles are quick and easy. Your chicken builds up eggs, and you can take over other nests by tapping on them to send your chicks their way. The enemy does the same. It can be difficult to tell exactly how effective your force is, since Chickon does away with visible numbers, but it’s rarely all that relevant. Once you claim all the enemy’s nests, you win the match, earning one chicken feed and possibly some power-ups. 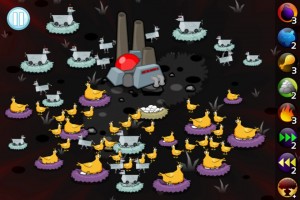 The power-ups are another new addition, and they add grinding, strategy, and an opportunity for IAP. For the ordinary battles, you won’t generally need them. My biggest complaint about the game is that the difficulty curve is far too subtle. It’s pretty much go in and win for way too long. Freeing roosters is a bit tougher — the enemy starts with more nests — and destroying factories can be extremely difficult. That’s where the power-ups come in. You can use them to steal nests, destroy enemy units, build up your supply, speed up your troops, and even nuke everything in sight. You can pull them out freely in a pinch, but they’re limited in quantity.

You can earn more by fighting more robots, and there are plenty of robots to fight. Some battles might earn you none, others just a few, and some will give you piles of power-ups. If you just can’t get enough, you can also purchase Chickbux to buy more. Use them well and you can blast through otherwise punishing fights.

It’s an interesting system, and as far as grinds go it’s a fun one. But Chickon loses out by abandoning Galcon’s multiplayer features. Since it’s so microtransaction-based I imagine multiplayer could be a frustratingly imbalanced experience, but the single-player content isn’t compelling enough keep most players interested for all that long. It’s a dilemma that might not be solvable, and it makes me wonder if Chickon was ready to leave the nest at all. Overly-generic art and sound effects don’t help that impression.

Still, at the price it’s worth a look, especially if Galcon’s epic-scale space battles struck you as a bit too pretentious. Chickon is an oddball game with a lot of oddball character, and if it feels too much like a cash-in at times it’s still not without intriguing features. It’s a game you can play for 30 seconds and feel like you’ve made tangible progress, and that’s not something to take lightly. With a little more love, Chickon could have been something truly interesting — instead, we’ll have to settle for often grindy, and occasionally fun. Agree? Disagree? Share your thoughts in our discussion thread.