Ninja Throw [$0.99 / HD], the latest casual game from Chillingo’s Clickgamer brand, is a physics-based puzzler with a decent implementation of some interesting ideas for the puzzle genre. Unfortunately, like so many puzzle titles before it, Ninja Throw fails to strike that balance between difficulty and longevity, leading to a game that is simply too easy and too short. However, despite these concerns, Ninja Throw is still worth a play through for gamers that aren’t too caught up on challenges.

Taking control of a ninja that encounters way too many obstructions, your goal is to toss shurikens and hit the gong on the other side of the level. Various barriers, such as poles and boxes of TNT impede your shuriken’s path. Thankfully, there’s a variety of environmental aids to help you get past those barriers and hit that gong. Premise wise, Ninja Throw really doesn’t offer anything new to the genre, as fans of similar physics-based puzzlers are going to be familiar with the general gameplay. However, some of its environmental supports bring a twist to the gameplay. 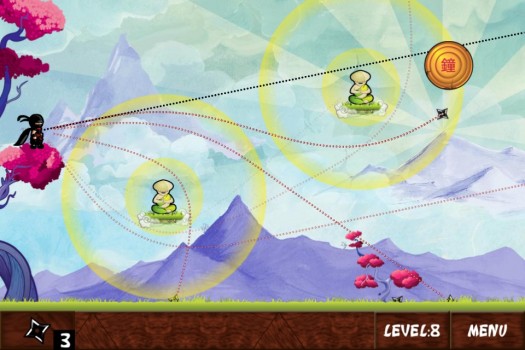 There are two kinds of tools available to the ninja: clouds which change the direction of your shrunken, and sensei that use their telekinetic powers that either pull your shuriken towards them or push them away. The sensei are the crux of all the strategic gameplay in Ninja Throw, and are my favorite element in the game. Basically, each sensei has a telekinetic aura around them which alters the path of the shuriken depending on how deep into the aura you throw it. Later levels allow you to manually place your sensei which let you nail otherwise impossible shots. Placement of sensei actually requires a basic understanding of gravitation push/pull and is the hardest concept to master (but is also the most fun).

Folks that feel like some of the concepts may be too hard need not worry as Ninja Throw has a lot of game decisions that make it pretty easy. For one, each level has a ton of shurikens to experiment with. In addition, each shuriken’s path is telegraphed on the screen with a dotted line, making it very easy to fine-tune throws and cloud/sensei placement. Also, Ninja Throw has a lot of tutorial-esque levels that do a good job introducing each concept, meaning that players will have a lot of practice before they have to complete the hard levels.

Unfortunately, my primary complaint with Ninja Throw is that there just aren’t enough hard levels. Once you get past the gaggle of tutorial levels, there are not that many missions that are actually challenging (with the exception of the last tier). Considering there’s only a total of 60-70 missions (depending on the amount of bonus ones you unlock), Ninja Throw has an extremely short gameplay experience. Sure, the three-star scoring system provides some replayability, but it’s still relatively simple to three star most missions and move on.

It really is a shame, because I think a lot of Ninja Throw’s worth is in those difficult missions. I understand the need for a good tutorial system, but there’s no reason why the developer couldn’t have taken the extra time to add a few more sets of missions for folks that speed through the introductory missions. Regardless of the relative lack of content, I still think Ninja Throw tosses out enough interesting ideas to be worth a playthrough, even with the current oversaturation of physics-based puzzlers. However, don’t expect much of a challenge for the most part.