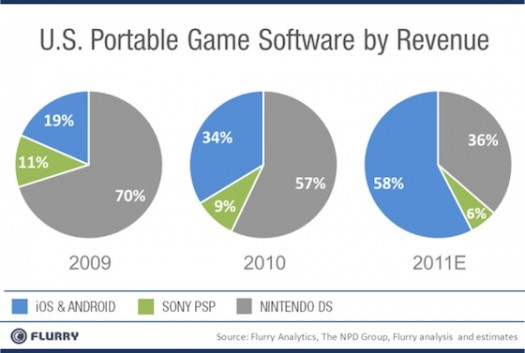 Mobile analytics firm Flurry today reports on the continuing shift in portable gaming from dedicated devices to smartphones and other multipurpose devices. According to results compiled by Flurry from NPD market research and Flurry’s own mobile app data, Apple’s iOS and Google’s Android mobile operating systems will account for 58% of portable gaming revenue in the United States for 2011, an almost exact flip-flop from 2010 when dedicated device leaders Nintendo and Sony held 57% of the market.

The most striking trend is that iOS and Android games have tripled their market share from roughly 20% in 2009 to nearly 60% in just two years. Simultaneously, Nintendo, the once dominant player, has been crushed down to owning about one-third of market in 2011, from having controlled more than two-thirds in 2009. Combined, iOS and Android game revenue delivered $500 million, $800 million and $1.9 billion over 2009, 2010 and 2011, respectively.

Flurry’s data for 2011 is based on estimates for the final two months of the year, but suggests that the rapid growth in gaming on smartphone platforms is showing no signs of slowing. The market dynamics of free or low-cost games sometimes supplemented by in-app purchases and played on multi-function devices versus dedicated gaming devices with relatively high-cost game titles are clearly playing out in favor of iOS and Android. The result has been a surging gaming market increasingly attracting casual gamers willing to spend a few dollars to play on their phones, while established players have seen not only their shares but also their revenue declining each year.

Nintendo has been resisting increasing pressure to bring its games to the iPhone and other platforms, sticking by its long-standing tradition of making its games exclusive to its own hardware. Flurry suggests that the rapidly-shifting landscape of portable gaming may soon bring Nintendo face-to-face with a “Nokia-like" decision whether to jump over to smartphone platforms or watch its business erode away.