I expected to love Evertales [$0.99]. Its trailer is stylish and charming, it looks a tiny bit like Trine, and it’s by Thunder Game Works, the folks who made the Trenches series, and Crescent Moon Games, the studio that brought us Pocket RPG, Aralon, Gears and other great games. We were optimistic in our previews. But here’s the thing about expectations — sometimes they leave you disappointed.

Despite its impressive pedigree, Evertales falls totally flat. It’s short, and it’s got a few kinks that still need working out. It’s excessively straightforward. But far worse than any of that, it’s just not very much fun.

The formula should work. You’ve got three heroes, each with his own set of abilities. Sort of. You have platforming, combat, and something that could resemble puzzle-solving if you squint hard enough. You’ve got upgradeable weapons and big boss fights. You’ve got great looking environments — I’ll give this game that much. But you haven’t got much else. 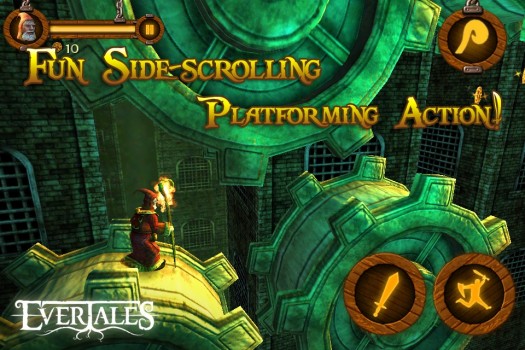 The trouble starts with those three heroes and their abilities. They just aren’t all that unique. The archer can shoot, but so can the mage and warrior if you buy their extra weapons. The mage can cast spells, which is a lot like shooting but much more useful. The archer can double jump, and the mage can float slowly to the ground. There will be areas where you need to use those abilities. The warrior can’t do much, but he seems to hit pretty hard. You can switch between them, but for the vast majority of the game you won’t have any reason to want to.

Then there’s the levels. There are only twelve, and they aren’t particularly long. It’s actually more like six with a hard checkpoint in the midst of each. They aren’t hard, though they’re occasionally irritating. I ran into a few bugs, places where I fell forever, coins that were stuck, that sort of thing. But more frequently I encountered areas where I’d be one death in before I could see where I needed to go next, which is simply shoddy level design. Deaths don’t mean much, though. You’ll run past several checkpoints per level, and you lose nothing for dying. It might rob the game of some potential challenge, but at least it keeps the lousy parts from getting too frustrating. 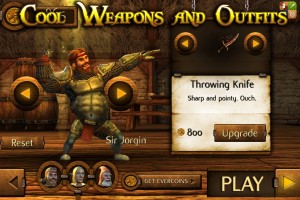 At the end of every second level, you’ll find a boss. It seems like the idea of these bosses is to provide an epic, puzzling fight, but jumping and hitting them works efficiently and universally, right down to the final boss.

Like me, you might think you’ll find some replayability in the Game Center integration. You probably won’t. Most of the achievements are for defeating the game’s six bosses. The others are for collecting all the armor for each of the characters. You can do that by grinding for coins — which just means replaying levels to collect the same coins in the same spots, not improving your performance or anything — or you can just buy the IAP. Which you should probably do if you’re really into getting achievements, since there’s one for that too. Maybe it’s just me, but achievements lose a bit of their luster when you literally need to purchase them.

When you beat the game, you unlock Survival mode, which will give you a leaderboard to climb. You get a tiny sliver of Evertales‘ least interesting level to stand on while you fight off waves of enemies. It doesn’t seem like you can earn coins this way, so forget about working your way up the leaderboard while earning useful upgrades.

The controls are another issue. By default, they’re awful. Movement is controlled with a virtual stick that hangs out wherever you place your thumb, and that’s fine. But jumping and attacking are both controlled by swipes on the right side of the screen, and more often than not the game confuses which you intend. That’s okay, because there’s a traditional jump/attack button set up available. It probably should have been the default, but that’s the least of this game’s problems.

Aesthetically, Evertales is pretty good. It looks great, sounds good, and has some cute cosmetic upgrades for its heroes. Otherwise, it’s bland and boring. I’ve always been pleasantly surprised by these studios in the past. Evertales was a surprise, but it wasn’t pleasant. Whether you love it or hate it, though, share your thoughts in our discussion thread.