Vector Unit has already made a name for itself with water-based racing games — especially when you consider the developers release last year of the stupid-entertaining Hydro Thunder Hurricane for XBLA. Now, they’ve ported the initially Android only Riptide GP [$4.99] to iOS and the arcade action racer is boasting some of, if not the best water physics on the platform, but the game itself might not totally live up to the impressive water effects.

That said, those impressive water physics come at a cost — namely that they’re only really impressive on the new devices. The game plays significantly different on a 4S than on, say, an original iPad, because the waves move and change in real time on newer devices, but are flat on older ones. It’s not just a visual thing — you’ll feel like you’re playing a different game. 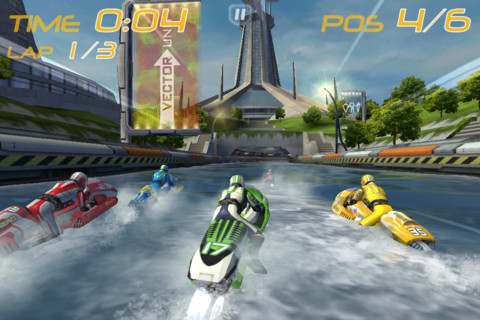 That game is something of a mash-up of Wave Race 64 and Wipeout. It’s not as trick-based as Wave Race, nor does it have the incredibly fun multiplayer, but it does have jet skis. In every other way, it’s more akin to Wipeout-sans weapons, the visuals come in a sterile, far-future aesthetic, the sound is pumping electronic music and the game is packed full of gleaming lights. Even the track design is similar to Wipeout, especially in its closed corridor tight turning craziness.

As with a lot of racing games, your primary control will be the tilting the device. There’s no option for a virtual stick, so if you hate tilt controls, you might want to hold off for an update later, as the developer has popped into the forums to say it’ll be added later. On top of the tilting, you’ll also tap occasionally for a speed burst and you can use an invisible virtual pad to perform tricks, but they don’t seem to have any effect the score, so you’re just showing off to yourself. 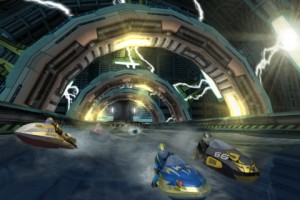 You’ll get six tracks here, then an additional six where they’re reversed. You’ll also be able to take on championship cups in one of three different speeds, 250cc, 500cc, and 1000cc. The easier 250cc can be a bit dull, but it gets you used to the track design and feel of the game, so it’s necessary. When you’re ready, taking on the 500cc and 1000cc races are significantly more challenging and entertaining.

The entire game is packaged like Wipeout in nearly every way, even the menu screens feel similar. That said, it also feels as barren and constrained as Wipeout at times, especially when it comes to track design. The world you’re racing in exists for one reason or another, but you’ll likely always be wondering why this crazy, futuristic society decided to flood its streets with water so people could race around on jet skis.

The track design never seems to fully evolve either. Generally, tracks in arcade racers get more complicated as they move along, but here they’re all about even in difficulty, with the only real spike coming from the more artificial speed of your jet ski or the occasional obstacle. They’re not bad by any means, but they do come across as generic at times. There’s also nothing else to do but race, no stunt courses, goofy tricks or anything else, it’s a pure racing experience without too much hassle around it.

It would certainly have been nice to get some multiplayer, even just on a local level, but even without it, Riptide GP is an entertaining title that looks fantastic on new devices. You might want to dip your toe in the water slowly if you’re cruising without an A5 chip under the hood, but overall, Riptide GP is a solid racer with good controls — it’s just too bad the track design is a little barren.